Trying to regularise unauthorised colonies since 2014 but was done only in 2019 as Delhi govt wasn't sharing its responsibility: PM Modi 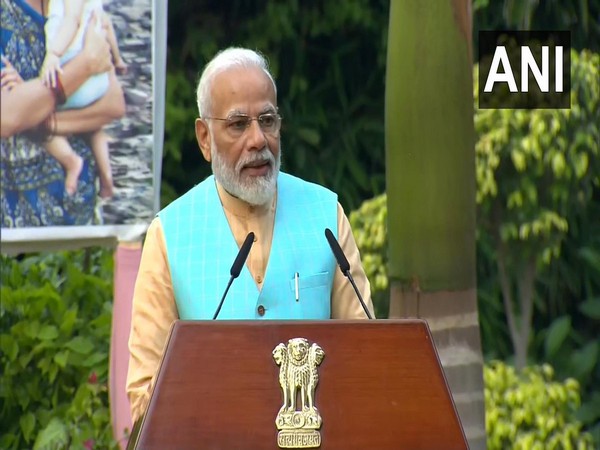 New Delhi [India], Nov 8 (ANI): Prime Minister Narendra Modi on Friday said he had been trying to give ownership to the people living in the national capital's unauthorised colonies since 2014 but the feat could be achieved only in 2019 because the city-state government was refusing to play any part in this.

"We had been seeking routes to achieve this since 2014. We had hoped that the state government will be ready to share its responsibility but in vain. Then we decided that irrespective of anyone coming forward or not, we cannot be irresponsible. The Indian government will complete this job responsibly," said Prime Minister Modi while addressing a gathering of BJP leaders, office-bearers of Resident Welfare Associations (RWAs) and members of the unauthorised colonies.
"You have lived a very challenging life. You were born in the colonies that were unauthorised. Your dreams had to face that challenge at every step. You expected to be freed from this problem from several governments, but it never got solved," he said.
Congratulating those who have benefitted from the decision to regularise Delhi's scores of unauthorised colonies, the Prime Minister said: "It is like a second Diwali for the residents of Delhi. I want to congratulate all of you from the bottom of my heart. You're here to pay me regards, but in reality, I want to pay all of you my regards."
BJP MP Hans Raj Hans and leader Vijay Goel along with other party leaders had accompanied the people and office-bearers of RWAs to the Prime Minister's residence here to thank him for the Cabinet's decision to give ownership rights to 40 lakh people living in unauthorised colonies.
On October 23, the Union Cabinet announced that it had approved regulations for conferring ownership rights to residents of unauthorised colonies, which would benefit 40 lakh residents of the national capital.
The decision is applicable to 1,797 identified unauthorised colonies that are inhabited by lower-income groups and do not apply to 69 affluent colonies identified by DDA including Sainik Farms, Mahendru Enclave, and Anant Ram Dairy.
Modi said the BJP workers had a huge role to play in the policy formulation concerning the unauthorised colonies in Delhi and said that the government had followed the policy of, "Sabka Saath, Sabka Vikas, and Sabka Vishwaas" in implementing it.
In the course of his speech, Prime Minister Modi also touched on important decisions such as revocation of Article 370 from Jammu and Kashmir, anti-Triple Talaq bill.
"Since Independence, obstructing, misguiding and stalling had become a tradition in the country. A feeling of suspense had been created in Jammu and Kashmir by putting in place Article 370. Ending this too was in my destiny."
"Think of those Muslim mothers and daughters who lived under the fear of Triple Talaq. They were always afraid of being at the receiving end of it. We ended the practice of Triple Talaq," added Modi. (ANI)