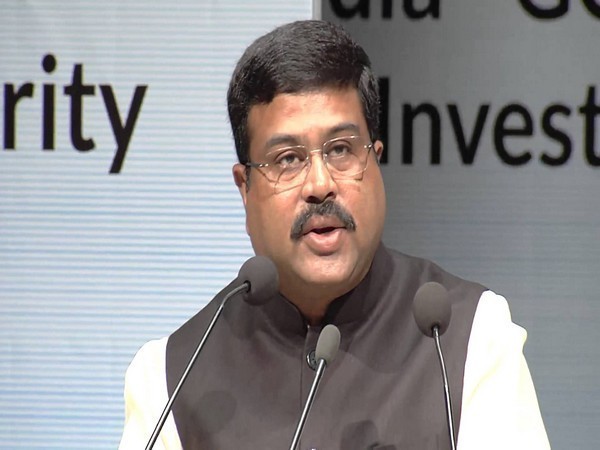 Abu Dhabi [UEA], Sept 12 (WAM/ANI): The United Arab Emirates can play a major role in India's ambitious transition from a hydrocarbon economy to a gas-based economy as the two countries are "enjoying an excellent relationship, said Union Minister Dharmendra Pradhan, in an interview to Emirates news agency, WAM.

"Although the UAE is not a primary supplier of gas, the country can be a big investment partner in some of India's gas projects such as putting up the pipelines, Liquefied Natural Gas (LNG), terminals and city gas distribution networks," Union Minister of Petroleum and Natural Gas, Pradhan added.
"We have a very ambitious vision to develop all areas related to gas," said Pradhan who was on a three-day official visit to the UAE.
The current share of gas in India's energy mix is 6.2 percent, in comparison to the global average of 24 percent. The Indian Government aims to increase it to 15 per cent by 2030.
"The UAE and India are enjoying an excellent relationship. For the first time, the UAE awarded a stake to an Indian consortium in Lower Zakum offshore field in Abu Dhabi [in 2018]. It is very prestigious for the Indian hydrocarbon industry. We are interested in exploring similar new areas of opportunities in the UAE," Pradhan said.
He said that pre-construction activities would start soon on the project site of US$44 billion Ratnagiri Refinery in the western Indian state of Maharashtra, with the participation of the UAE.
"The state government is acquiring the land and once it is completed, we will go public with the details," Pradhan explained.
The joint venture, which was announced in 2018, involved one of the largest Foreign Direct Investment, FDI, deals in India, with Saudi Aramco and Abu Dhabi National Oil Company, ADNOC, jointly owning 50 per cent stakes, with the remaining owned by a consortium of India's state-owned oil companies.
About another of the largest FDI deals in India - announcement on 11th August on Saudi Aramco's intention to acquire a 20 per cent stake in India's Reliance's Oil-to-Chemicals business in a deal valued at US$15 billion - the minister said, "If it materialises, it will create value to both countries."
Asked about the reported "regulatory and other approvals required" for the deal, he said, "They don't need any approval from my ministry. It is a deal between two companies. Government of India will support any kind of investment in Indian markets. Certainly, that [the deal] will go smooth," Pradhan explained.
The UAE's investments in the mega refinery project and Indian Strategic Petroleum Reserves Ltd's underground oil storage facility in Padur, south of India, are examples of "the UAE's commitment to do more business with India," he said.
As a supplier of crude oil and petroleum products to India, the UAE will now have a major role in India's transition to become the top energy consumer in the world, the minister added.
"Now, India is the third-largest energy consumer in the world. With a projected energy demand growth of 4.2 per cent per annum, India will become the top energy consumer in the next 15 years," Pradhan said.
More people are joining the energy consumption club thanks to the expansion of India's rural electrification and Liquefied Petroleum Gas supplies networks, he concluded. (WAM/ANI)