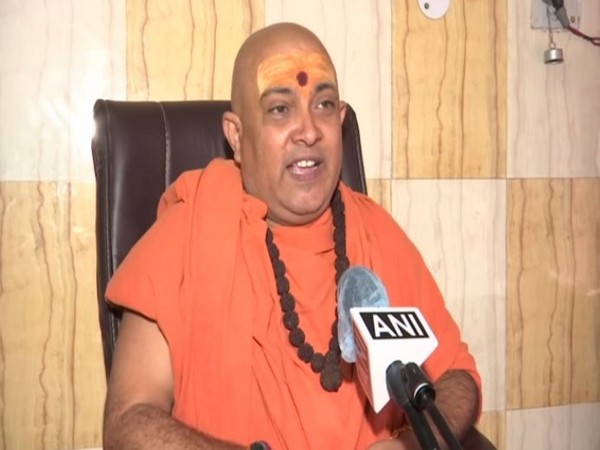 By Pragya Kaushika
New Delhi [India], Aug 2 (ANI): Akhil Bharatiya Sant Samiti, one of the highest bodies of Hindu sadhus and sants, has launched a scathing attack on Shiv Sena Chief and Maharashtra Chief Minister Uddhav Thackeray for suggesting that the bhoomi poojan of Ram Temple at Ayodhya be performed via video conferencing.

Jitendranand Saraswati General Secretary Akhil Bharatiya Sant Samiti said that a 'nalayak' (unworthy) son was occupying the legacy of a tall leader (Bal Thackeray). "Uddhav has studied in a convent school and can't understand the difference between virtual and real," he added.
"Baap ki virasat par nalayak beta baitha ho use dharm adhyatm ki bhasha rajneeti ki bhasha lage, yeh dukhdh hai. Jab Italian Battalion ki god mein baithe ho to yahi hoga (It is sad that the unworthy son who is living on his father's legacy equates political language with that of spirituality. What can you expect more from someone who is sitting in the lap of Italian battalion)," said Saraswati.
Saraswati praised Bala Saheb Thackeray for his continued support to the Ram temple cause. "His father was a tall figure. But Uddhav studied in a missionary school and will not understand the difference between virtual and real. How can the bhoomi poojan be performed without touching the earth?" asked Saraswati.
The religious leader, who has been invited to the bhoomi poojan, stated that industrialists coming to the event will help rebuild Ayodhya.
"Today's dilapidated Ayodhya will be future India's spiritual capital. We cannot even imagine the change after the bhoomi poojan. Many industrialists are coming here. We expect them to rebuild Ayodhya. From ruins, filth and monkey menace and it will move towards Ram Rajya. That is the aim of this bhoomi pujan," he said.
Saraswati is now excited about the future of temples at Kashi and Mathura as well.
"Hopefully, we will witness Krishna janmbhoomi after Ram janmbhoomi. Kashi, and Mathura were not different for us when we took up the cause of Ayodhya. We just wanted three of our temples back. Sangh will discuss the time frame as and when it can be taken under a legal framework," he said.
Shree Ram Janmbhoomi Teerth Kshetra Trust, a Supreme Court-mandated trust will define temples' role towards sanathan Hindu society and strengthen the society in areas like education and health, he added.
Prime Minister Narendra Modi is scheduled to lay the foundation stone of the Ram temple in Ayodhya on August 5. The construction of Ram temple will begin in Ayodhya after the ceremony to lay the foundation stone in which various dignitaries from the political and religious fields are likely to participate apart from RSS chief Mohan Bhagwat. (ANI)