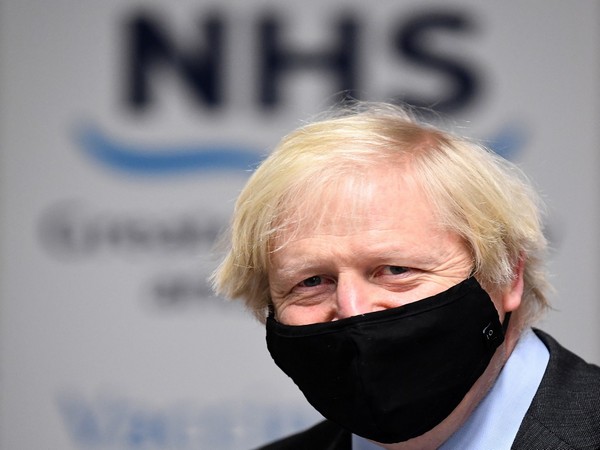 London [UK], February 22 (ANI): United Kingdom Prime Minister Boris Johnson, on Monday has warned there will be more deaths from Covid-19 as the country "cautiously, but irreversibly" exits lockdown.

"We cannot escape the fact that lifting lockdown will result in more cases, more hospitalizations and sadly more deaths," he told lawmakers in the UK Parliament as he announced his roadmap toward lifting restrictions, according to CNN.
"No vaccine can ever be 100 per cent effective, not everyone will take them up and like all viruses, Covid-19 will mutate... There will always be some vulnerable people that will not be affected by vaccines," he added.
Still, the prime minister added that the country could not "persist indefinitely" with lockdown restrictions that were crippling the British economy, CNN reported further.
"Today's measures will apply in England but we're working closely with the devolved administrations... We're able to take these steps because of the resolve of the British public and the extraordinary success of our NHS in vaccinating 17.5 million across the UK," Johnson said further.
Johnson told lawmakers that step one would begin on March 8, as schools finally reopen across England, as well as the return of limited outdoor social interaction, such as sitting on a park bench with one other person. Step one will also have a second phase on March 29, where further restrictions will be lifted, allowing groups of six to meet outside and two households to mix.
CNN further reported that the following steps would take place with a minimum five-week gap, the Prime Minister said, allowing four weeks for the government to gather the appropriate data and one week to alert the public and sectors involved.
Step two of the plan, which would happen no earlier than April 12, will see the return of non-essential retail, such as hairdressers, gyms, museums, zoos and theme parks. Social contacting rules will remain in place for indoor activities, meaning that they can only be attended with your own household.
Step three, which will be in place no sooner than May 17, will remove most social contacting rules. Groups of up to 30 will be able to meet outdoors in a public space or private garden. Pubs and restaurants will be allowed to serve indoors, though the rule of six will apply. Indoor entertainment will also be allowed to resume, with venues allowed to host up to 1,000 people. Spectators will be allowed to return to live outdoor sports, with up to 10,000 allowed to attend the largest venues, such as Wembley Stadium.
Lastly, step four, will see the removal of most social contacting rules and the return of nightclubs. Personal life events like weddings will have no limitations if things go well. In the weeks and months leading up to step four, the government will carry out reviews on large outdoor events, such as music festivals.
The American outlet further reported that the development comes as the UK's vaccine rollout continues to lead the rest of Europe, while scientific research indicates that vaccinations lower the risk of hospitalization up to 94 per cent.
Scientists from the University of Edinburgh, the University of Strathclyde and Public health Scotland examined data from people who had received the first dose of the either the Pfizer or AstraZeneca vaccine. (ANI)