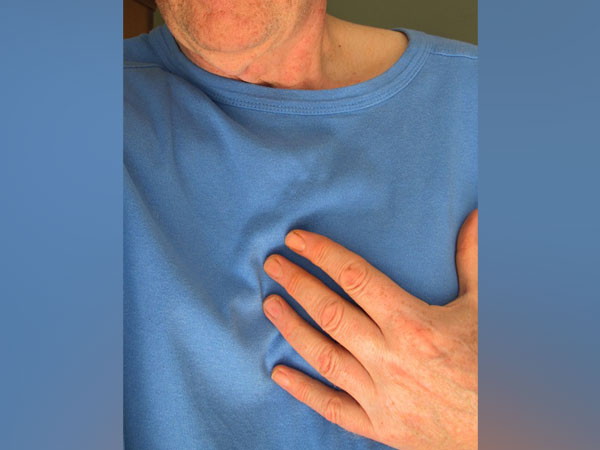 London [UK], September 21 (ANI): After surviving a heart attack, the proportion of patients who experience a repeat attack within a year fall between 2008 and 2017, with a greater decline in women than men, according to new research.

The research was published today in the American Heart Association's flagship journal Circulation.
Despite the improvement, the rate of recurrent heart attacks, hospitalization for heart failure, and death remain high in heart attack survivors.
"Secondary events after a heart attack may be prevented by ensuring that patients receive guideline-recommended treatments to lower the risk for recurrent heart disease and death after hospital discharge," said Sanne A. E. Peters, Ph.D., lead author of the study and senior lecturer at The George Institute for Global Health in collaboration with Imperial College London, United Kingdom.
While the number of people dying from a heart attack has decreased substantially over the past few decades, those who survive are at increased risk to experience another heart attack or to die within a year after they leave the hospital. To examine the change in rates and compare the changes in men and women, researchers used data from Medicare and commercial health insurers on more than 770,000 women and more than 700,000 men who were hospitalised for a heart attack between 2008 and 2017. Researchers looked at the rates of recurrent heart attacks, procedures to open clogged heart arteries and, hospitalisations to treat heart failure during the first year after hospital discharge following a heart attack. Among Medicare patients, the rate of death from all causes was also tracked.
The researchers found that between 2008 and 2017, the age-adjusted rates (in terms of the number per 1,000 person-years):
-recurrent heart attack declined from 89.2 to 72.3 in women and from 94.2 to 81.3 in men overall; however, the rate did not decline in women aged 21-54 years old or in men aged 55-79;
-recurrent heart disease event rates (either heart attack or undergoing a procedure to open clogged arteries) declined from 166.3 to 133.3 in women and from 198.1 to 176.8 in men;
-hospitalization due to heart failure rates declined from 177.4 to 158.1 in women and from 162.9 to 156.1 in men; and
-death rates from any cause in those age 66 and older declined from 403.2 to 389.5 in women and from 436.1 to 417.9 in men.
"Improvements in the emergency treatment of heart attacks and better treatment options for people who survive a heart attack may explain the overall decline," Peters said.
As for the lack of decline in recurrent heart attacks in younger women and older men, Peters said they don't know why the rates were different in these populations, "In women, it could be that younger women and their treating physicians may be more likely to miss signs of worsening heart disease."
For recurrent heart attack, recurrent heart disease events, and heart failure hospitalizations, there was a proportionately greater reduction over time in women than men. The sex differences persisted in the most recent year studied. In 2017, there were higher rates of heart attack and heart disease events and death in men, but higher rates of heart failure hospitalization among women. These rates were adjusted for multiple variables including age, race, and various medical conditions and treatments.
"We expected to see a decline in the rate of events, however, we did not expect the rates to differ between the sexes. It may be that the improvements in men were achieved before our study period, leaving less room for improvement in the most recent decade. It could also be that the attention paid to heart disease in women over recent years has resulted in greater gains. However, regardless of the improvements, the rates of recurrent events in people who survived a heart attack are still very high in both sexes. Patients should speak with their doctors to ensure that they get the right treatments to prevent secondary events and must make sure that they adopt or maintain a healthy lifestyle," said Peters.
While the database used in the study was large, multi-ethnic, and included a wide age range, findings from these insured groups may not be generalizable to the overall population. The study is also limited because the data sources do not include information on the severity of heart attack, so the reduction in repeat attacks over time might reflect a reduced severity of the initial attacks. (ANI)