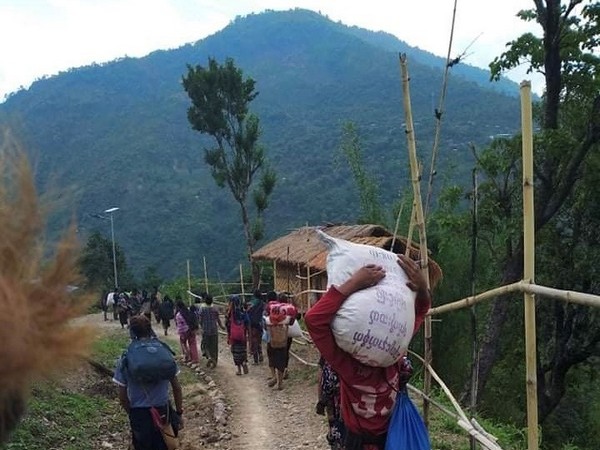 New York [US], June 10 (ANI): A United Nations rights expert has warned of "mass deaths" from starvation, disease and exposure in the Kayah State of Myanmar after 1,00,000 civilians fled following "brutal, indiscriminate attacks" by the military.

"Mass deaths from starvation, disease and exposure could occur in Kayah State after many of the 100,000 forced to flee into forests from junta bombs are now cut off from food, water and medicine by the junta. The international community must act", UN Special Rapporteur for Myanmar, Tom Andrews, tweeted late on Monday.
In his alert, Andrews noted that the Kayah state attacks were just the latest in a series throughout Myanmar that had caused mass displacement and suffering, from Mutraw in Karen state to Mindat in Chin state and Bago city.
The independent rights expert, who reports to the Human Rights Council, emphasised that the lives of many thousands of men, women and children were under threat from indiscriminate attacks, on a scale not seen since the 1 February coup, "that likely amount to mass atrocity crimes".
The development echoes concern by the UN Country Team in Myanmar, which on Monday underscored the rapidly deteriorating security and humanitarian situation in Kayah State and other parts of the country, linked to protests caused by the military takeover.
On February 1, the Myanmar military overthrew the civilian government and declared a year-long state of emergency. The coup triggered mass protests and was met by deadly violence.
As of Tuesday, as many as 857 people have been killed as the military government has violent cracked down on peaceful anti-coup protests, while 4,704 are currently under detention, according to the Assistance Association for Political Prisoners (AAPP).
Citing credible reports, Andrews said that people were in dire need of food, water, medicine and shelter after reported clashes with volunteer community militias, while the UN country team said that many had also sought safety in host communities and forests across Kayah and southern parts of neighbouring Shan state.
Aid deliveries had been allegedly blocked to those forced to flee their homes to escape bombing raids and artillery fire and the military had also placed landmines on public roads, said the Special Rapporteur.
"Any pressure or leverage UN Member States can put on the junta must now be exerted" to encourage junta leader Min Aung Hlaing to allow life-saving aid in, and to stop "terrorising the population by ceasing the aerial bombardment, shelling and shooting of civilians," he said.
In its appeal, the UN Country Team reiterated earlier calls for all parties to protect all civilians and civilian infrastructure, "particularly medical units and health workers".
Despite the fact that UN aid teams and their partners had supplies that were ready to be deployed "insecurity, travel restrictions imposed by security forces, and poor road conditions are delaying the delivery of supplies", the team said in a statement.
The team called on "the security forces to allow for a safe passage of humanitarian supplies and personnel and to facilitate our ability to directly provide aid to all those who need it."
"Now, more than ever, the international community must cut off access to the resources that the junta needs to continue these brutal attacks on the people of Myanmar," Andrews said. (ANI)