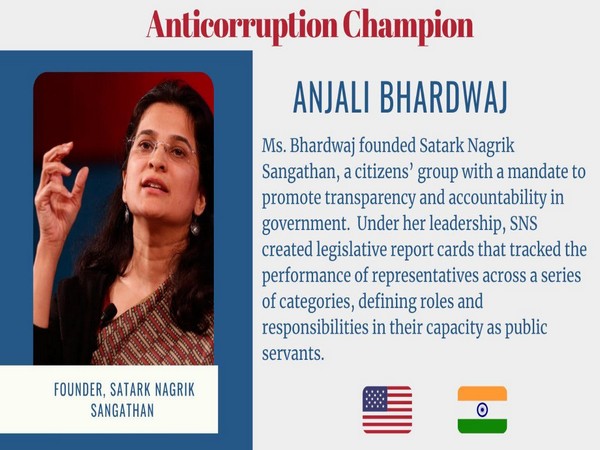 According to a statement from the US Secretary of State Antony Blinken, the award recognises individuals who have worked tirelessly, often in the face of adversity, to defend transparency, combat corruption, and ensure accountability in their own countries.
"As President Biden has emphasised, our commitment to truth, transparency, and accountability is a mission that we must live at home and exemplify abroad. I commend the dedication of these 12 brave individuals to these same ideals," Blinken said.
Besides Bhardwaj, the honorees include Ardian Dvorani of Albania, Diana Salazar of Ecuador, Sophia Pretrick of the Federated States of Micronesia, Juan Francisco Sandoval Alfaro of Guatemala, Ibrahima Kalil Gueye of Guinea, Anjali Bhardwaj of India, Dhuha A Mohammed of Iraq, Bolot Temirov of the Kyrgyz Republic, Mustafa Abdullah Sanalla of Libya, Victor Sotto of The Philippines, Francis Ben Kaifala of Sierra Leone, and Ruslan Ryaboshapka of Ukraine. They inspire us and so many of their counterparts pursuing these ideals around the world.
According to the State Department, Bhardwaj has served as an active member of the Right to Information Movement in India for over two decades. She is also the founder of Satark Nagrik Sangathan (SNS), a citizens' group with a mandate to promote transparency and accountability in government and encourage active participation of citizens.
Under her leadership, SNS created legislative report cards that tracked the performance of representatives across a series of categories, defining roles and responsibilities in their capacity as public servants.
Additionally, Bhardwaj is a convener of the National Campaign for Peoples' Right to Information, which successfully advocated for the creation of an anti-corruption ombudsman and the Whistle Blowers' Protection Act, offering protection to those who expose corruption and abuse of power. (ANI)