US is India's largest export destination, followed by UAE 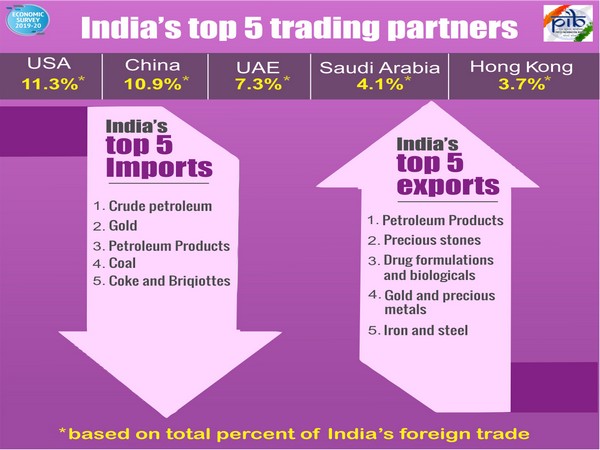 New Delhi [India], Jan 31 (ANI): The largest export destination remains the United States of America (USA), followed by the United Arab Emirates (UAE), China, and Hong Kong, according to the Economic Survey 2019-20, which was tabled in Parliament by Finance and Corporate Affairs Minister Nirmala Sitharaman on Friday.

According to the Survey, India's merchandise trade balance improved from 2009-14 to 2014-19 on the back of a decline in crude prices. The merchandise exports-to-GDP ratio declined to 11.3 per cent, due to weakened global demand and heightened trade tensions over 2018-19 to H1 of 2019-20.
"Petroleum, oil and lubricants (POL), precious stones, drug formulations and biologicals, gold and other precious metals continue to be the top exported commodities. The largest export destinations being the United States of America (USA), followed by the United Arab Emirates (UAE), China, and Hong Kong," adds the Survey.
The merchandise imports-to-GDP ratio also declined, entailing a net positive impact on the BoP position. This is because of the large presence of crude oil in the import basket. Share of gold imports, another important component of import basket, has remained stable in spite of a rise in gold prices. India's imports continue to be the largest from China, followed by the US, the UAE and Saudi Arabia in that order.
The Economic Survey 2019-20 further observes that non-POL-non-gold imports are understood to be positively correlated with GDP growth. However, non-POL-non-oil imports fell as a proportion to GDP from 2009-14 to 2014-19 when GDP growth accelerated. This may have happened because of consumption-driven growth while the investment rate declined.
A continuous decline in investment rate decelerated GDP growth, weakened consumption, dampened the investment outlook, which further reduced GDP growth and along with it, non-POL-non-gold imports as a proportion of GDP from 2018-19 to H1 of 2019-20.
In sync with an estimated 2.9 per cent growth in global output in 2019, global trade is estimated to grow at 1.0 per cent after having peaked in 2017 at 5.7 per cent. The slowdown in world trade reflects a confluence of factors, including a slowdown in investment, reduced spending on capital goods and a decline in trade of cars and car parts.
The Survey adds that global trade is projected to recover to 2.9 per cent in 2020, with recovery in global economic activity, although the future is ridden with uncertainties over trade tensions and change in global value chain structures.
Under trade facilitation, India has improved its ranking from 143 in 2016 to 68 in 2019 under the indicator - 'Trading across Borders' -- monitored by the World Bank in determining the overall ranking of around 190 countries in its Ease of Doing Business Report.
In a recently released UN Global Survey on Digital and Sustainable Trade Facilitation 2019, India not only improved its overall trade facilitation score from 69 per cent to 80 per cent but also outperformed other countries in the Asia-Pacific and South and South-West Asia region.
The logistics industry of India is a sunshine sector, currently estimated to be around US$ 160 billion and shortly expected to touch US$ 215 billion.
According to the World Bank's Logistics Performance Index, India ranks 44th in 2018 globally, up from 54th rank in 2014. The Economic Survey observed that driving down logistics cost from estimated current levels of 13-14 per cent of GDP to 10 per cent in line with global standards is the next step forward, for which interventions like Fast-tag, Bharatmala, Sagarmala and Dedicated Freight Corridors will be a huge boost. (ANI)