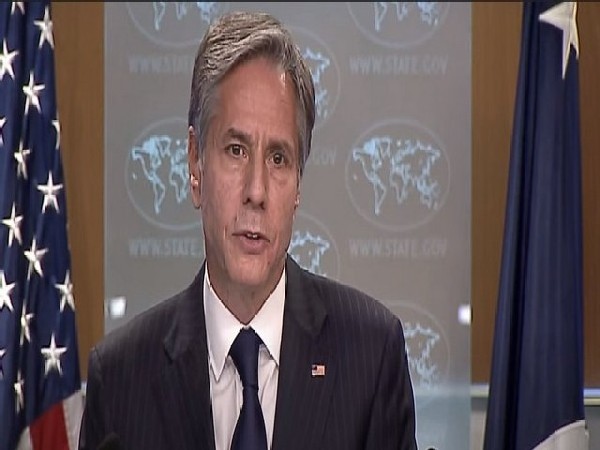 By Reena Bhardwaj
Washington [US], September 15 (ANI): For the second day, Secretary of State Antony J. Blinken on Tuesday confronted a barrage of questions from US lawmakers about last month's withdrawal from Afghanistan and the attempts to rescue people and deal with a future Taliban government.

Lawmakers cutting across the party lines demanded more severe action against Islamabad for its subversive role in Afghanistan.
The top two members of the committee, New Jersey Democrat Bob Menendez and Idaho Republican James Risch, both assailed the withdrawal as a debacle in their opening remarks and demanded action against Pakistan for "double-dealing in Afghanistan".
Bob Menendez Chairman of the Senate Foreign Relations Committee asserted: "We need to understand the double-dealing by Pakistan and providing a safe haven to the Taliban."
"We need to understand why successive administration made so many of the same mistakes, repeatedly. Perhaps most urgently we need to understand why the Afghan government and military collapse so precipitously," the democratic leader Mendez cited in his opening remarks.
Republicans especially have been hammering the administration for what was a chaotic withdrawal that ultimately stranded thousands of people attempting to escape.
Republican Senator James Risch said that he was concerned over the Biden administration rushing to normalise ties with the Taliban government and how it must not occur without extensive congressional consultations. "We also must understand Pakistan's role in this entire matter, as the Chairman (Mendez) has alluded to. This is a difficult but important situation."
US Senator Marco Rubio, a Republican from Florida, spoke at the hearing telling Secretary of State Antony Blinken that "the Biden Administration's disastrous withdrawal from Afghanistan is evidence that "we have got the wrong people making military and diplomacy decisions in our government."
With Reference to India, Rubio told Secretary Blinken: "if you are India, you look at this and saying if the United States allowed Pakistan to unravel their standing because the Pakistani role in all this -- and multiple administrations are guilty of ignoring it -- The Pakistani role in enabling the Taliban is ultimately a victory for those pro-Taliban hardliners in the Pakistani government. India has to be looking at this and say, 'If the United States could have a third-rate power like Pakistan unravel its aims, what chance do they have of confronting China?'"
Asked by Senator Ron Johnson and Senator Mike Rounds if the US had factored in and developed a strategy towards Pakistan for having a history of supporting terror to which Blinken noted: "We have established across more than 100 countries, and in the UN, through a Security Council resolution basic expectations of the Taliban led government. And if those expectations are not met, and other countries are aiding and abetting so that the Taliban is able to not fulfil those, those expectations. There'll be consequences for that too."
The secretary also faced questioning on how it will be possible to deal with the Taliban led government and also with Pakistan going forward.
During his testimony, Blinken said the US is aware of countries like China, Russia and Pakistan that stand as 'outliers' in the effort of resolving the situation in Afghanistan and declared "that's something we'll be very vigilant about as well."
Responding to Blinken, US Senator Chris Van Hollen, a Democrat from Maryland, said: "So obviously we have to keep an eye on the ISI, get that but let's all work together to achieve the goal of a stable Afghanistan that protects the rights of his people."
Blinken during his testimony noted that it was the Trump administration that struck a deal with the Islamist Taliban organization that paved the way for its return to government. The Trump administration also all but shut down the program to issue visas to Afghan interpreters and others the U.S. now wants to rescue. The secretary made the same points Monday before a House committee. (ANI)