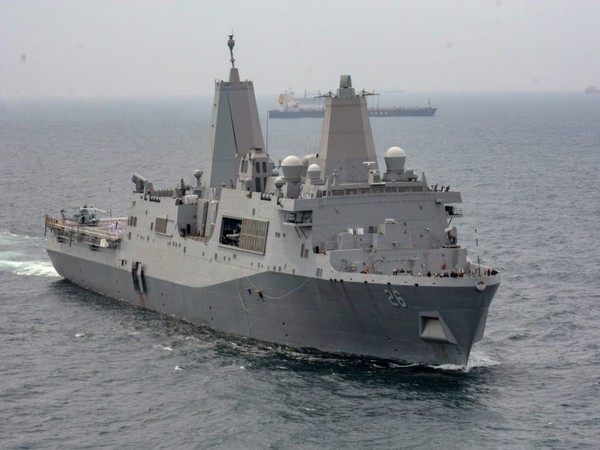 Washington DC [US], April 7 (ANI): The US guided-missile destroyer USS John S. McCain on Wednesday carried out a transit through the Taiwan Strait amid the increasing Chinese aggression in the region.

US warships have made similar passages through the waterway separating Taiwan and China on three occasions before Wednesday since Joe Biden took office on January 20, Focus Taiwan reported.
"The Arleigh Burke-class guided-missile destroyer USS John S. McCain (DDG 56) conducted a routine Taiwan Strait transit April 7 (local time) through international waters in accordance with international law," the US Navy said in a press release.
"The ship's transit through the Taiwan Strait demonstrates the US commitment to a free and open Indo-Pacific," the release added.
It also said the US military would continue to fly, sail and operate anywhere where international law permits.
This comes as China's navy has announced that its military drills near the island will become more regular in a move to further escalate tensions near Taiwan.
Taiwan has been complaining of an increase in Chinese military activity near it in recent months, as Beijing steps up efforts to assert its sovereignty over the island, reported Japan Times.
China's navy said its carrier group, led by the Liaoning -- the country's first aircraft carrier -- was carrying out 'routine' drills in the waters near Taiwan, claiming that the aim was to "enhance its capability to safeguard national sovereignty, safety and development interests".
"Similar exercises will be conducted on a regular basis in the future," the navy said on Monday.
This came after Taiwan's Defence Ministry reported a new incursion by China's air force into the island's air defense identification zone. Taiwan's Defense Ministry said it had a "full grasp" of the situation in the air and at sea surrounding Taiwan and that it was "appropriately handling" the matter, Japan Times reported.
Beijing considers the self-ruled island of Taiwan part of China, but the US does not recognise the territorial claim.
China has previously accused the US of undermining peace and stability across the Taiwan Strait by sending US warships through the waterway. (ANI)