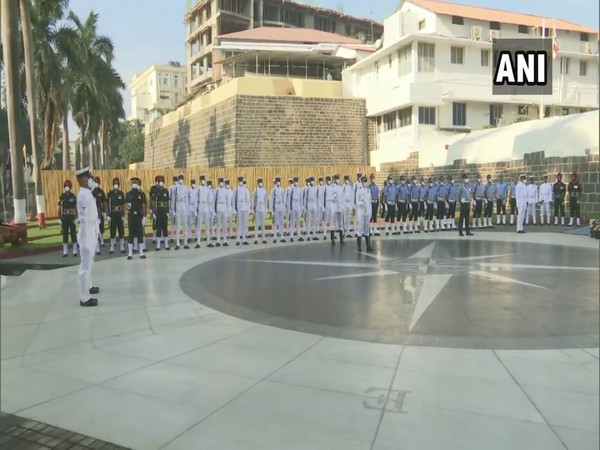 Mumbai (Maharashtra) [India], January 14 (ANI): On the occasion of the Veterans Day, a wreath-laying ceremony was held at the newly created Victory at Sea Monument "Gaurav Stambh" within the Naval Dockyard premises in Mumbai on Thursday.

According to an official statement, Vice Admiral Ajit Kumar, the Flag Officer Commanding-in-Chief, Western Naval Command laid a wreath at a solemn ceremony to pay tribute to 'those who had made the ultimate sacrifice in service of the nation'.
"Rear Admiral Srinivas Vennam, Flag Officer Commanding, Maharashtra Naval Area; Air Vice Marshal Shiv Ratan Singh, the Air Officer Commanding, Headquarter Maritime Air Operations; and Major General Raj Sinha, the Chief of Staff of the Maharashtra, Gujarat and Goa Area (MG and G Area) as also veterans from the three services laid wreaths on behalf of the respective services," it stated.
The statement said in addition to the formal ceremony, an e-Rally was organised for the larger ex-servicemen community over a virtual platform to effectively reach out to them without violating any COVID-19 protocols.
"Towards this, e-kiosks were set up and manned by services representatives to resolve queries and address difficulties being faced by the veterans," it stated further.
The Armed Forces Veterans Day is celebrated as a mark of respect and recognition to the services rendered by the first Commander-in-Chief of Indian Army, Field Marshal KM Cariappa. (ANI)