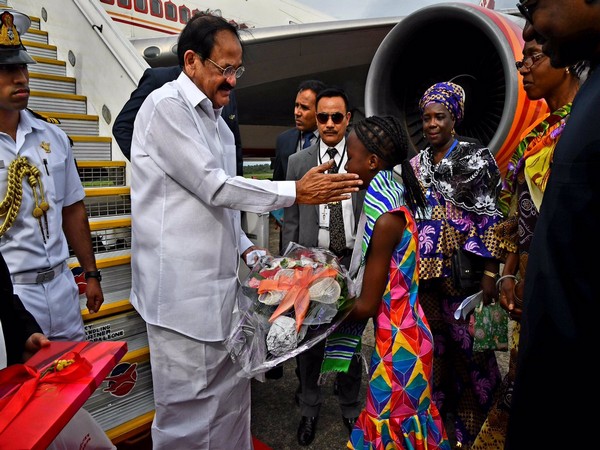 He was received by Dr Mohammed Juldeh Jallah, the Vice President of Sierra Leone upon his arrival here. Naidu was given a ceremonial welcome and was presented the Guard of Honour.
Ministry of External Affairs Spokesperson Raveesh Kumar said in a tweet, "#IndiaSierraLeone | Deepening our warm ties with Sierra Leone, VP @MVenkaiahNaidu arrived to a heartwarming welcome in Freetown."
Naidu is expected to have a detailed bilateral meeting with the country's President Julius Maada Wonie Bio and will meet Speaker of Sierra Leone Parliament Chernor Bundu.
India has a long history of cordial relationship with Sierra Leone. New Delhi had played an important role in achieving peace and stability in the African country by contributing troops to the UN Assistance Mission in Sierra Leone (UNAMSIL) in 2000-01. India has also assisted Sierra Leone in the post conflict peace-building phase.
New Delhi has extended concessional lines of credit to Sierra Leone worth USD 123 million in sectors such as agriculture, water and transmission line. In addition, Sierra Leone has also availed lines of credit worth USD 49.45 million from ECOWAS Bank for Investment and Development (EBID) for projects in solar and telecom sector out of Lines of Credit extended by India to EBID, the MEA had said in a statement before Naidu's departure for the five-day visit.
India has also undertaken grant projects through IBSA fund and provided direct humanitarian assistance to Sierra Leone during the Ebola crisis in 2014 and during floods in 2017. Sierra Leone is also a beneficiary of Indian Technical & Economic Cooperation (ITEC) programme. The bilateral trade has remained modest in recent years and in 2018-19 it was USD 124 million.
"The first-ever visit of Vice President to the two countries (Union of Comoros and Sierra Leone) is expected to provide new momentum to our bilateral partnership with these countries. The visit is part of India's Africa outreach policy. Our engagement with the African continents has intensified in the last 5 years and covers a large number of sectors," the MEA had said in a statement.
Vice President M Venkaiah Naidu is on a five-day visit to Union of Comoros and Sierra Leone. Earlier six MoUs were signed between India and Comoros during the Vice President's visit to the African country. (ANI)