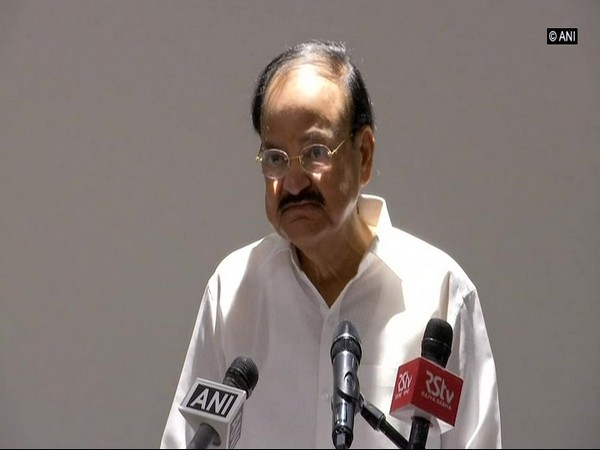 New Delhi [India], Aug 16 (ANI): Vice President of India M Venkaiah Naidu on Friday paid rich tributes to the former prime minister Atal Bihari Vajpayee by recalling his contribution to India and referring to him as a "beloved leader and role model".
Naidu marked Vajpayee's first death anniversary by remembering the late leader's contribution to nation-building and credited him with bringing systematic changes to governance.

Taking to micro-blogging site Twitter, the Vice President said, "I join the nation in remembering former Prime Minister of India, 'Bharat Ratna', Shri Atal Bihari Vajpayee Ji on his Punyatithi today. I offer my tributes to the tallest leader of our times. Atal Ji was a role model, an astute parliamentarian, an administrator par excellence, a visionary statesman, an erudite scholar, a gifted orator, a most beloved leader, above all, a great human being who believed in the core Indian values of harmony and synthesis."
Naidu who was the Union Cabinet Minister for Rural Development from September 2000 to June 2002 in the Atal Bihari Vajpayee-led central government also recalled the BJP stalwart's contribution towards the betterment of the country.
"Atal Ji brought systematic changes in the governance of the country through technology, innovation, and research to improve the lives of people. He brought the connectivity revolution and paved the way for development and growth", Naidu said.
Stating that providing a responsive administration to the people, especially to the most vulnerable sections of the society was central to Vajpayee Ji's administration, Naidu added, "He implemented the reform agenda and delivered good governance to the nation amidst great challenges".
Naidu who also served as the BJP president between 2002 to 2004, recalled his association with the party stalwart and called himself fortunate for knowing the visionary leader for over 40 years and having the opportunity of working under his dynamic leadership as a ministerial colleague.
Earlier in the day, President Ram Nath Kovind, Prime Minister Narendra Modi, Home Minister Amit Shah along with many other cabinet ministers paid tributes to Vajpayee at his memorial 'Sadaiv Atal' in Delhi.Vajpayee's foster daughter and her family were also present.
One of the tallest leaders of the country and BJP's founder member, Vajpayee breathed his last at All India Medical Sciences on August 16, 2018, at the age of 93. (ANI)