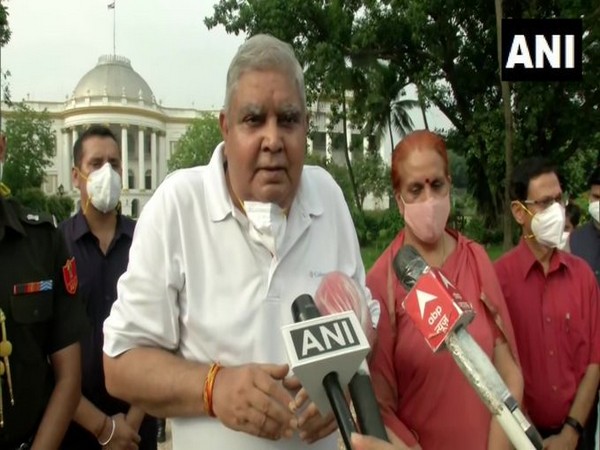 Kolkata (West Bengal) [India], July 21 (ANI): Days after the West Bengal Chief Minister Mamata Banerjee accused the National Human Rights Commission (NHRC) of "disrespecting the court" and pursuing "political interests of the BJP" by leaking its report on alleged post-poll violence to the media, West Bengal Governor Jagdeep Dhankhar on Tuesday asserted that the final report became a public document due to a judicial order.

"The first (NHRC) report was an interim report. Calcutta HC has not released that report. The final report became a public document because of a judicial order. The matter is sub-judice. The law will take its own course," said Dhankhar while speaking to ANI on the NHRC report on post-poll violence.
On July 15, West Bengal Chief Minister had alleged that the report was leaked online under a political conspiracy by the commission.
Mamata had said, "Now even neutral organisations are being used by the BJP for their political interests. Our state is being defamed. The Human Rights Commission should respect the court. Instead of leaking the report to the media, it should have been handed over to the court."
The same day, the NHRC in its report on the alleged post-election violence in West Bengal submitted to Calcutta High Court stated that "Spatio-temporal expanse of violent incidents in the state reflects appalling apathy of the state government towards the plight of victims".
In the report, the committee said, "This was retributive violence by supporters of the ruling party against supporters of the main opposition party. It resulted in disruption of life and livelihood of thousands of people and their economic strangulation."
Later, the NHRC refuted allegations in a section of the media regarding the leakage of the report relating to the post-poll violence in West Bengal.
In a statement, the rights body said that it has shared copies of the said report with the advocates of the concerned parties in this matter in accordance with the directions of the Calcutta High Court.
"The National Human Rights Commission constituted a Committee to enquire into the post-poll violence in West Bengal, as per the directions of the Calcutta High Court. The Committee submitted its report to the Court on July 13, 2021.
On the further directions of the Court, the Committee provided a copy of the said report to its Advocate in Calcutta, who shared with the Advocates of all the concerned parties in the related multiple writ petitions," the statement read.
"The matter being sub -judice, the Committee of the NHRC did not share its report with any entity other than those specified by the Court. Since the report is already available with all the concerned parties as per the directives of the Court, there is no question of leakage at the level of the NHRC. The attribution regarding the alleged leakage of the said Report to the NHRC is absolutely baseless and factually incorrect," it added. (ANI)