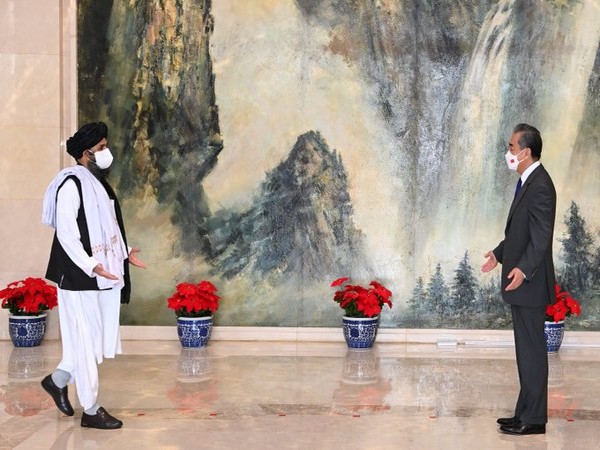 Beijing [China], September 15 (ANI): China can take part in the construction of Afghanistan and provide assistance in other essential sectors, said the Taliban as it dismissed India's concerns that stem from Beijing's large-scale investment projects in the region.

Some of India's concerns aren't appropriate and neither are they plausible, said Taliban Spokesperson Suhail Shaheen, in an interview with Chinese mouthpiece Global Times.
With the US and NATO troops withdrawal from Afghanistan now over, the Taliban regime is looking to China for major investments in the coming six months in the troubled country.
"While having ended the occupation, we need to focus on the reconstruction of Afghanistan. And now China has come forward to help us with the construction of Afghanistan to create jobs for our people. So what is wrong with that?" asked Shaheen.
He said the Taliban has a policy of mutual self-interests and added that it is "very important" in this critical situation that China comes forward to help Afghanistan.
"China can also take part in the construction of Afghanistan and provide assistance in other essential sectors. After this, both countries can then enter into mutually beneficial bilateral agreements which best serve the interests of both countries through mutual respect."
Earlier, Taliban spokesperson Zabiullah Mujahid had expressed that the group "desires" to join the China-Pakistan Economic Corridor (CPEC).
Citing the sources, Nikkei Asia reported that China has been courting the Taliban since 2018 on possible projects in Afghanistan.
"There are verbal agreements between Beijing and Taliban about investments," Nikkei Asia quoted the sources as saying. The sources added, "Once the Taliban government gains global recognition, China will start building infrastructure projects in war-torn Afghanistan."
Last week, a virtual meeting of the foreign ministers of Afghanistan's neighbours -- China, Iran, Tajikistan, Turkmenistan, Uzbekistan and Pakistan -- was hosted by Pakistan's foreign minister Shah Mehmood Qureshi.
During the meeting, China promised emergency aid of USD 31 million to Afghanistan, including grain, winter supplies, vaccines and medicines. "What China can do now is maintain necessary contacts with the Taliban in the fields of normal economic activities and people-to-people exchanges," reported Chinese state media.
Andrew Small, a senior trans-Atlantic fellow with the Asia program at the German Marshall Fund, believes the Taliban's immediate investment requests give China leverage. "Beijing will be happy to dangle promises and engage in talks on the BRI and CPEC extensions, but will not move ahead with anything on the ground until they are confident of political and security conditions," Small told Nikkei Asia.
CPEC is a part of China's most ambitious project 'Belt and Road Initiative', aimed at renewing the country's historic trade routes in the coastal countries of south-east Asia. With CPEC, Beijing aims to expand its influence in Pakistan and across Central and South Asia in order to counter the influence of the United States. (ANI)