Will continue agitation against farm laws till Centre takes it back: Rakesh Tikait 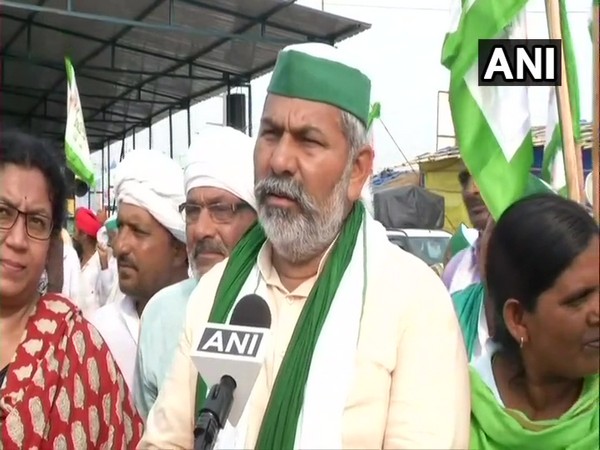 New Delhi [India], July 21 (ANI): Ahead of the 'Kisan Parliament' to be held at the Jantar Mantar in the national capital on Thursday as a protest against the three farm laws, Bharatiya Kisan Union leader Rakesh Tikait on Wednesday said it has just been eight months since the farmers are protesting and will continue the agitation till the Centre takes it back.

Speaking to ANI, Tikait said, "Our 200 people will go from the Singhu border in four-five buses tomorrow. We will gather from different protest sites at Singhu border and head towards the Jantar Mantar. We will protest at Jantar Mantar until the Monsoon session of Parliament is over."
"It is the duty of the police to stop the movement. We will continue protesting at the Jantar Mantar the way we are protesting. It has just been eight months since we are protesting. We do not know how long the agitation will last but it will go on peacefully and properly," he said.
"The Central government has brought these laws and it will take it back, it will take time," Tikait added.
Meanwhile, Delhi Police on Wednesday said it has offered certain terms and conditions to farm union leaders and depending on their agreement farmers from the Singhu border will be granted permission to hold their protest march in the national capital during the ongoing monsoon session of Parliament.
"Around 2,500 Delhi police officials along with 3,000 paramilitary personnel will remain deployed at Singhu border on Thursday. Apart from this, anti-riot force, water cannons and tear gas are on standby to make all efforts to stop the anti-social elements among the farmers from crossing over into Delhi forcefully, similar to what happened on Republic Day this year," police sources said.
Security has been heightened in the national capital with personnel deployed at Jantar Mantar.
The farmers during their repeated rounds of talks with the police have said they intend to begin their daily protest from tomorrow and will hold 'Kisan Parliament' at Jantar Mantar every day till the monsoon session of Parliament is in progress. Every day 200 farmers will reach Jantar Mantar to stage a protest from 11 am to 5 pm against the three farm laws.
Farmers have said that each of these 200 farmers will carry identity cards and will reach Delhi in buses escorted by the police.
However, this time police said they are not taking any chances after what happened on January 26 this year and have made proper arrangements.
Apart from the main highway all routes leading to Delhi are under surveillance and are being monitored round the clock.
Farmers have been protesting on the different borders of the national capital since November 26 last year against the three newly enacted farm laws: Farmers' Produce Trade and Commerce (Promotion and Facilitation) Act, 2020; the Farmers Empowerment and Protection) Agreement on Price Assurance and farm Services Act 2020 and the Essential Commodities (Amendment) Act, 2020.
Farmer leaders and the Centre have held several rounds of talks but the impasse remains. (ANI)