Will continue working for people as Karnataka CM for next 2 years, says Yediyurappa 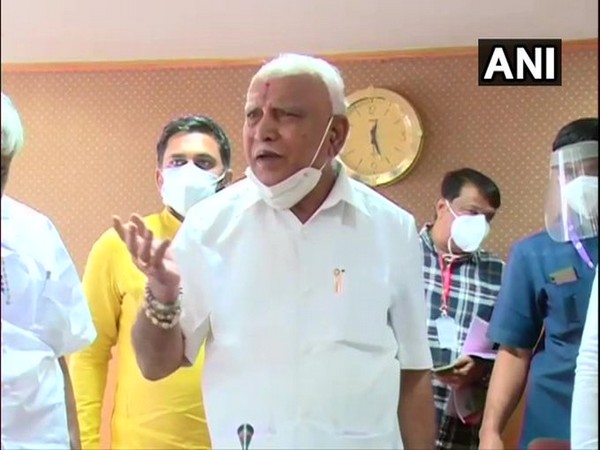 Hassan (Karnataka) [India], June 12 (ANI): A day after BJP national general secretary and Karnataka in-charge Arun Singh ruled out his replacement, Chief Minister BS Yediyurappa on Friday asserted that he will continue to be the chief minister for the next two years and work for the development of the state.

"Our state incharge Arun Singh himself has said that Yediyurappa is the Chief Minister for the next two years. I will try to do my best work in the remaining two years. No need to talk about speculations. I promise to continue working as the Chief Minister for the next two years," Yediyurappa said while speaking to reporters here.
He added that his responsibility has increased because of the trust shown in him by the BJP high command.
"My concentration is only on working for the people. I will try to work and try to save the faith which our Prime Minister and Amit Shah have in me," he said.
Meanwhile, Arun Singh is expected to visit the state next week. He is expected to speak to MLAs and submit a report to the high command on the rumblings within Karnataka BJP.
Putting an end to speculations of Yediyurappa's resignation as the Karnataka Chief Minister, Singh had on Thursday had stated that there is no proposal or even a discussion to replace Yediyurappa.
"Yediyurappa is the chief minister, is doing good work and will remain the chief minister," he added.
Earlier, Congress leader and Leader of Opposition in Karnataka Legislative Assembly Siddaramaiah had said that the BJP has taken no action against those party leaders who spoke against Yediyurappa.
Siddaramaiah had demanded a leadership change, terming the chief minister and the BJP high command in the state 'weak'.
"Both the chief minister and the BJP high command in Karnataka are weak. Arun Singh said don't talk about change then why is there no action against those who spoke against BS Yediyurappa and are demanding leadership change? Yeddyurappa is a weak chief minister. And instead of taking action, the party high command is trying to cover it. When Yediyurappa is weak, what else will the high command be?" Siddaramaiah had questioned.
"We have not insisted on replacing Yediyurappa. I was told that there is a discussion going on over CM change in Delhi. If the chief minister does not change, why has the BJP High Command not taken action against MLAs Basanagowda Patil Yatnal, Arvind Bellad, Vishwanath, Renukacharya and Minister Yogeshwar even after their statements against Yediyurappa?" he added.
Yesterday, after some BJP leaders speculated about the resignation of Yediyurappa, state Revenue Minster R Ashoka had said that the chair of the Chief Minister is "perfectly occupied."
Yediyurappa had on Sunday stated that he will resign from the post the day the party high command asks him to quit.Speaking to the media persons, he had said, "I will resign the day the party high command asks me to quit. I do not speak about the rumours and the speculation created by some of the ministers and legislators."
"High command has given me the opportunity - I am trying to utilise it and I am trying to serve the people. I do not want to comment on the rumours of whoever speaks against me. If my high command wants me to resign, I will resign. I myself am involved in working for the development of the state," he had added. (ANI)