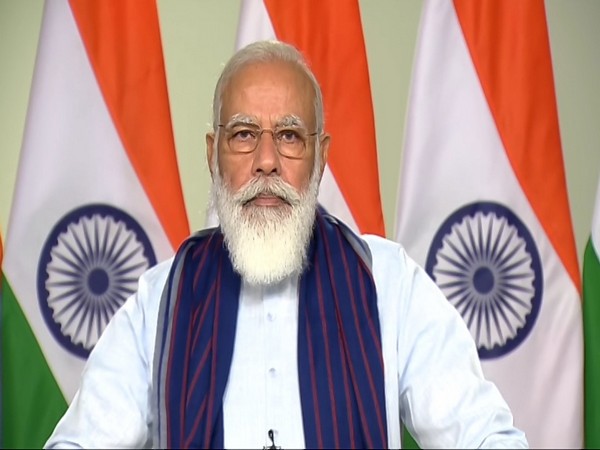 New Delhi [India], November 22 (ANI): Laying the foundation stone of rural drinking water supply projects in Mirzapur and Sonbhadra districts of Uttar Pradesh, Prime Minister Narendra Modi on Sunday said that the region was neglected for decades after independence and underlined that in the past few years, work has been fast-tracked in the region to get water supply to every household in the region.

"If there is any region that was neglected for decades after independence, then it is this region that was neglected the most. Because of that, many people were forced to relocate from here. In the coming time, when 3,500 villages get water supply, it will change the lives of over 40 lakh people," PM Modi said.
He said that lakhs of families will get drinking water at their homes under this scheme.
"Be it Vindhyachal or Bundelkhand, despite having a lot of resources, these regions became regions of deficiencies. In spite of having several rivers, these regions came to be known as the most thirsty and drought-affected regions," PM Modi said addressing the event via video conferencing.
"This will also further the effort of getting water supply to every household in the state and the country. Uttar Pradesh is an example of development despite the ongoing COVID-19 pandemic. This is changing the image of the Uttar Pradesh government and its people," he added.
PM Modi also lauded the efforts of the state government in handling the COVID-19 pandemic and said it's not a small feat how migrants, who came back during the pandemic, were taken care of.
"It has been over a year of 'Har Ghar Jal' scheme. Over 2.60 crore families have been provided access to clean drinking water through taps at their homes. Projects started today will further speed it up," he said.
The projects will provide household tap water connections in all rural households of 2,995 villages and will benefit about 42 lakh population of Mirzapur and Sonbhadra districts. Village Water and Sanitation Committees or Paani Samiti have been constituted in all these villages, who will shoulder the responsibility of operation and maintenance.
The total estimated cost of the projects is Rs 5,555.38 crores. The projects are planned to be completed in 24 months.
Uttar Pradesh Chief Minister Yogi Adityanath, who was also present on the occasion said: "In 70 years drinking water supply projects could be regulated only in 398 villages in Vindhya region. Today we are here to take forward such projects in over 3,000 villages of the region." (ANI)