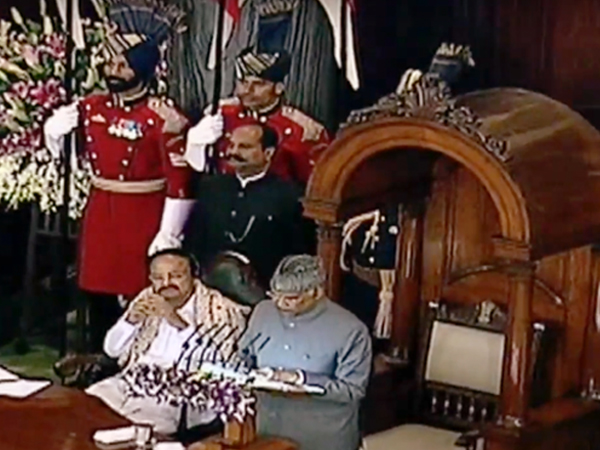 New Delhi [India], Jan 31 (ANI): President Ram Nath Kovind said on Friday that this decade will determine India's global standing in the times to come and the world will witness an inclusive, prosperous, capable and powerful New India.

Addressing the joint session of two houses of Parliament, the president said it is the bounden duty of every Member of Parliament and every countryman to strive hard to achieve their goals.
"This decade, which has just begun, will determine India's global standing in the times to come. The world will witness an inclusive, prosperous, capable and powerful New India in this decade. Hence it is the bounden duty of every Member of this House and every countryman to strive hard with all their capability to achieve their respective goals," he said.
He said efforts should be made to make every citizen conscious of and dedicated to his duties in the national interest, and ensure that this sense of responsibility becomes the guiding principle of civic life.
"Let us together make this decade of 2020 the decade of fulfilling our duties," he said.
The President said in a democracy, nothing is more sacred than the mandate given by the people and they have given this mandate for making of a new India.
"A new India which takes pride in the glory of our ancient culture and which enriches the 21st-century world with the power of its knowledge. A new India, in which besides finding solutions to old problems, new chapters of development are written. A new India, in which adequate facilities and new opportunities for growth are available for the poor, dalits, women, youth, tribals and minorities.
"A new India, where every region develops, no region is left behind, where the benefits of modern technology reach the farthest end of society, and a new India, which is at the forefront of the fourth industrial revolution and which attains new heights at the global stage," he said.
The President said there is a need to always remember that "we are first and foremost citizens of this country, and leaders or supporters of a particular ideology thereafter".
"The prestige of our country should be more important than our party loyalties. It is my belief that in the times to come, all of us together, drawing inspiration from the glorious past of our country, will make every possible effort to ensure a bright future for the country; and that we will also succeed in our endeavour. Let us all come together to fulfil the dream of a New India; let us together make a New India," he said.
The President, whose speech received repeated applause from the members of treasury benches, said that with the efforts of the government, a strong foundation has been laid in the last five years to make this decade India's decade and this century India's century.
"This decade is extremely important for India. In this decade, we will complete 75 years of our independence. In this decade, we all have to work together with new energy to give impetus to the making of a new India," he said.
The President said that the government is working with "commendable pace and decisiveness" to bring about changes in every field and for fulfilling the expectations of the people.
"It is the outcome of reforms at the grassroot level ushered in by the government in the last five years that there has been an unprecedented improvement in India's global ranking in several areas," he said.
Kovind said India has leapfrogged to the 63rd position, moving up by 79 places in the World Bank's Ease of Doing Business rankings.
In the Resolving Insolvency rankings, India has moved from 108th to 52nd position and in the Global Innovation rankings, from 74th to 52nd position, he said and added that India has improved its international ranking by 10 points in the Logistics Performance Index and it has moved from 52nd to 34th position in the World Economic Forum's Travel and Tourism Competitiveness rankings.
"These reforms in diverse areas are also a call to the international community to see how India has strengthened its foundations in the last 5-6 years and how keen the people of India are to build a new India," he said. (ANI)