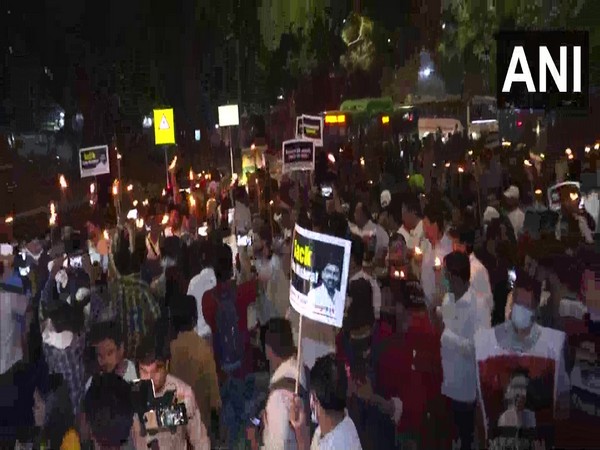 The youth congress members were raising slogans against the accused involved in the Lakhimpur Kheri violence. They were seen holding the placard which read "Sack Ajay Mishra".
As many as eight people including four farmers had died in the violence that took place on October 3. Uttar Pradesh police have so far arrested three people including Ashish Mishra, who is the son of Union Minister of State for Home Affairs Ajay Mishra Teni.
Earlier on Monday, demanding the dismissal of Ajay Mishra from the post of Union Minister of State for Home Affairs, over Lakhimpur Kheri violence, Samyukt Kisan Morcha (SKM) said they will scale up their agitation if the Minister is not dismissed immediately.
The umbrella body of farmers' unions protesting against the Central farm laws in a statement issued on Monday that reiterated earlier "ultimatum about October 11 being the deadline for the sacking and arrest of Ajay Mishra Teni".
Meanwhile, Union Minister of State (MoS) for Home Affairs Ajay Mishra Teni's son Ashish Mishra, who has been accused in the Lakhimpur Kheri incident, has been sent to three-day police remand with conditions on Monday.
Ashish was arrested on October 9 after 12 hours of interrogation by the Crime Branch of Uttar Pradesh police in connection with the Lakhimpur Kheri violence case. (ANI)