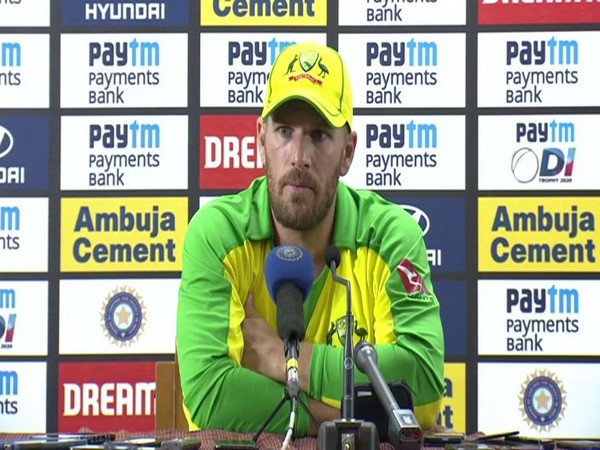 Bengaluru (Karnataka) [India], Jan 19 (ANI): After losing the third and final ODI of the three-match series against India, Australia skipper Aaron Finch heaped praise on the top-order of the Men in Blue and pinpointed the main reason behind the success of the hosts.

India chased down a total of 287 runs to win the series 2-1 and the hosts did it with seven wickets and 15 balls to spare.
Rohit Sharma and Virat Kohli starred with the bat as the duo played knocks of 119 and 89 respectively.
"They are great. They have Virat, who is probably the greatest ODI player of all-time, they have Rohit, who features in the top-five ODI batters of all time. They are exceptional. Experienced players in this Indian lineup are doing the job done and it is a feature of a good team," Finch told reporters after the conclusion of the third ODI.
Australia managed to post 286/9 in their allotted fifty overs. The side kept on losing wickets at regular intervals, but Steve Smith's knock of 131 runs enabled the side to post a challenging total.
The visitors also opted to send in pacer Mitchell Starc as a pinch-hitter, but the move backfired as he was dismissed for a duck by Ravindra Jadeja.
"I thought we were a few runs short. As soon as we started building a platform, we lost a wicket and then we had to rebuild again. The guys are still learning, the middle order has not played a lot of cricket together. I think there were so many positives from this series," Finch said.
"We felt bringing Starc early in the middle order was an attacking move. He can smack the left-arm spinners, we were hoping he could score two-three sixes and can throw the spinners off. The move did not come off, but it was an aggressive one," he added.
The Australian limited-overs skipper also said that the pitch at the M.Chinnaswamy Stadium played a little bit slower than the side expected it to.
"The pitch played a little slower than what we expected. It was a damn good wicket, all four spinners in the game bowled exceptionally well. There was a little bit of dew, it was a very good cricket wicket though," Finch said.
Australia will next take on South Africa in three T20Is and three ODIs. The first T20I will be played on February 21. (ANI)