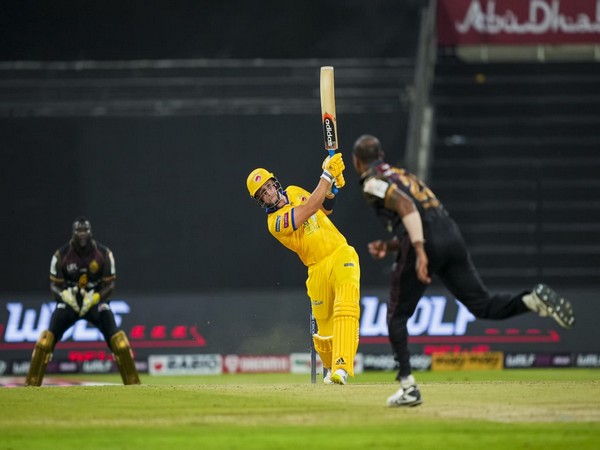 Captain Liam Livingstone played a fantastic innings of 68 not out from 23 balls to help Team Abu Dhabi post a total of 132/5 in their 10 overs and thereafter the Team Abu Dhabi bowlers picked up wickets at regular intervals to restrict the Warriors to 111/7.
Kennar Lewis kept the Northern Warriors in the game by thrashing Jamie Overton for three sixes in the third over, however, Danny Briggs pulled things back for Team Abu Dhabi by dismissing Samit Patel and Kennar Lewis in the next over.
Captain Rovman Powell took on the bowling single-handedly with an innings of 42 runs from 19 balls, but he didn't find much support from the other end. Naveen-ul-Haq tilted the match completely in Team Abu Dhabi's favour when he removed Powell and Jordan in the ninth over, leaving the Warriors 37 runs behind their target.
Earlier, the Northern Warriors bowlers kept Team Abu Dhabi in check by picking up wickets at regular intervals. The hard-hitting Paul Stirling was removed by Samit Patel for a first ball duck in the second over and the dangerous Chris Gayle was dismissed by Rayad Emrit for just nine runs in the fifth over. The Northern Warriors were in full control of the game when they restricted Team Abu Dhabi to 80/5 in eight overs.
However, Liam Livingstone took the responsibility and provided the impetus that his side needed. He smashed four sixes and two fours off Joshua Little's bowling in the ninth over and took Team Abu Dhabi's score to 115/5. Livingstone continued to hit the big shots, striking Chris Jordan for two sixes in the last over. Team Abu Dhabi gathered 17 runs off the last over and raised their total to a competitive one.
Brief scores: Team Abu Dhabi 132/5 (Liam Livingstone 68*, Philip Salt 29, Rayad Emrit 2-17) vs Northern Warriors 111/7 (Rovman Powell 42, Kennar Lewis 35, Marchant de Lange 2-6). (ANI)