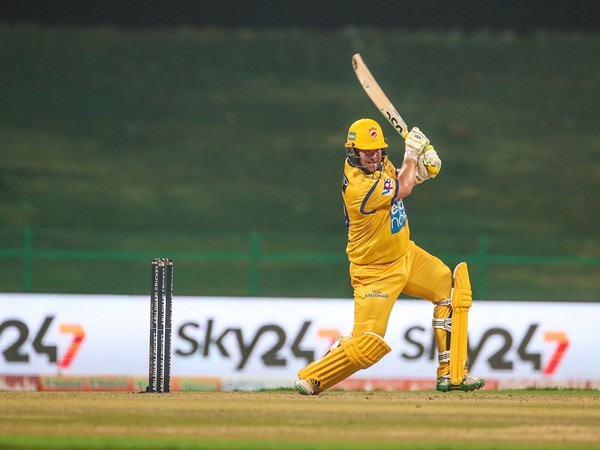 Abu Dhabi posted 116 for 3 through Stirling's knock that came off 32 balls with four sixes and five boundaries. Skipper Luke Wright too chipped in with 27 runs. Matheesha Pathirana, an 18-year-old medium-pacer from Sri Lanka, bowled tightly to take two wickets for nine runs to put the brakes on Abu Dhabi. After Abu Dhabi posted 71 runs in the first five overs, they could muster only 45 runs in the next five overs.
Chasing the target, Tigers' opener Johnson Charles lit up hopes of a victory through a quick knock of 59 runs off 23 balls with eight boundaries and three sixes. Once he fell, the rest of the batsmen followed quickly. Obed McCoy and Naveen Ul Haq's two wickets each, piled up the pressure. Rohan Mustafa too bowled brilliantly to give away just nine runs from his two overs. Overton then crushed Tigers' hopes by taking four wickets.
Earlier, Tigers won the toss and promptly elected to field. Stirling gave Abu Dhabi a quick start getting an edged boundary and a six to mid-wicket. Garton trapped the dangerous Chris Gayle leg before with the last ball of the first over. Mujeeb Ur Rehman, who bowled the second over, gave away only a boundary to Stirling. In the third over, Stirling hit Qais Ahmed for two sixes to mid-wicket. Skipper Luke Wright too opened out and hit Mujeeb for a six to mid-wicket. Stirling and Wright did not spare Karim Janat too and hit one six each to take 21 runs off the fifth over. At the halfway stage, Abu Dhabi was placed at 71 for 1.
Fazalhaq Farooqi bowled a tight sixth over giving away just four runs. Pathirana gave away two boundaries to Stirling in his seventh over. Abu Dhabi reached the 100 run mark in the eighth over. In the ninth over, Pathirana picked the wicket of Wright with the second delivery by having him caught at long-on for 27. With the fourth delivery, he had Joe Clarke caught at short third man for a duck.
Garton was introduced for the tenth over. He too bowled tightly giving just one boundary to Jamie Overton while Stirling remained unbeaten on 64.
Tigers began their chase with Johnson Charles pulling the first ball from Tom Helm to the boundary. He again pulled him for two successive boundaries off the fourth and fifth deliveries and flicked the last delivery for another boundary to take 18 runs off the over. Rohan Mustafa gave away only seven runs off the second over. In the third over, When Charles was on 22, he top-edged Obed McCoy to Naveen Ul Haq at backward square leg, but Haq dropped the catch. With the next ball, McCoy picked the wicket of Andre Fletcher by having him caught at long-on for 3. Chirag Suri too quickly followed when Overton trapped him leg before for 2.
Charles continued his big hits and lifted Overton for a six over long-on. He also hit Naveen for a six to mid-wicket and picked a boundary past short third man. At the halfway mark, Tigers were 60 for 2, needing another 57 runs from the last five overs. Mustafa bowled a splendid sixth over giving away just three runs. Tom Moores hit the first ball from McCoy for a six to long-on, but the pair could not get anything from the next five balls. McCoy then clean bowled Moores for 12.
With 46 runs needed off the last three overs, Charles on 49, was dropped by Stirling at deep square leg. He celebrated his escape with a six and a boundary, but hit another skier to Stirling and perished for 59.
The mantle of getting 34 runs from the last 12 balls fell on Karim Janat and Adam Hose. Janat hit Naveen high to Overton at long-on to be out for a duck. Naveen also picked the wicket of Qais Ahmed with the fourth ball of the over by having him caught at mid-wicket for another duck.
With 31 runs needed off the last over, Overton bowled a brilliant last over, taking the wickets of Garton and Mujeeb off successive deliveries, and then Farooqi's wicket with the last ball of the match.
Brief scores: Team Abu Dhabi 116/3 in 10 overs (Paul Stirling 64, Luke Wright 27, Matheesha Pathirana 2-9); Bangla Tigers 95/9 in 10 overs (Johnson Charles 59, Obed McCoy 2-10, Jamie Overton 4-24). (ANI)