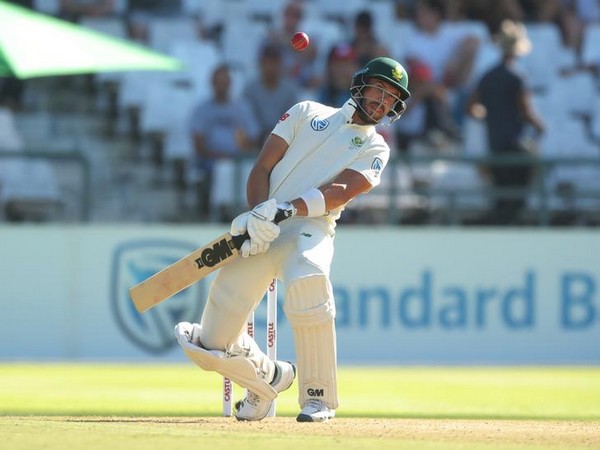 Johannesburg [South Africa], May 18 (ANI): South Africa opener Aiden Markram on Monday said that he wants to lead Proteas in the longest format of the game but he is not desperate for the role.

"I really enjoy captaincy. I enjoy the responsibilities that come with it. I would give an absolute arm and a leg to be able to do it, but I have said it before in the same breath, it's not the be-all and end-all so I don't want to become desperate about it," ESPNcricinfo quoted Markram as saying.
The 25-year-old opening batsman has played 20 Tests for the side and scored 1424 runs at an average of 38.48. He also holds the experience of leading South Africa's Under-19 team to World Cup glory in 2014.
Markram has spent most of the 2019-20 season sidelined with an injury and understands the need to cement his place in the team before he can be seriously considered to lead it.
"I thoroughly enjoy captaining and would be honoured if it were the case, but I don't want to look too much into it. If it were to happen, it would be amazing. But if not, there are plenty of good leaders within the environment that will take the team forward along with the management. My main focus is trying to get back into the side and stay on the field," he said.
Earlier, spinner Keshav Maharaj said that he would be more than willing to lead the side in all three formats of the game. Maharaj has some leadership experience behind him as he was the captain of the domestic side Dolphins during the One-Day Cup this season.
The Dolphins were awarded the title after Cricket South Africa (CSA) suspended the domestic season due to the COVID-19 pandemic.
After Faf du Plessis stepped down as the captain of South Africa, Quinton de Kock replaced him as the ODI skipper of the Proteas. De Kock also led South Africa in the T20I series against England and Australia this year.
The CSA is yet to name the skipper of the Test side. Proteas was slated to tour Sri Lanka for three ODIs and three T20Is, but the series has been postponed due to the coronavirus pandemic. (ANI)