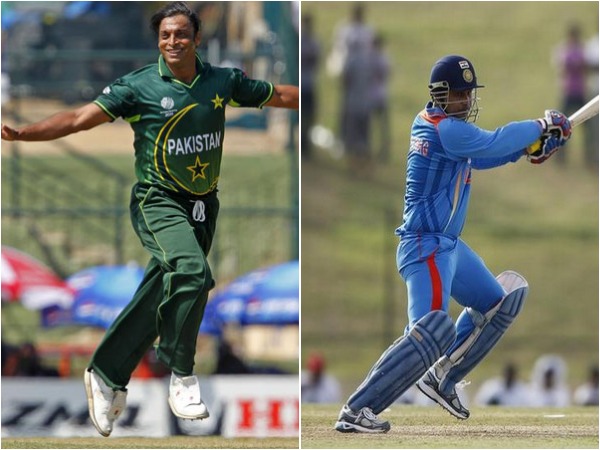 New Delhi [India], Jan 22 (ANI): Taking a dig at Virender Sehwag, former Pakistan cricketer Shoaib Akhtar on Wednesday said that he has more money than the swashbuckling Indian star's hair on his head.

Akhtar referred to Sehwag's old statement where he said that the former Pakistan cricketer keeps on praising India as he wants to earn money.
"I have more maal (money) than you have baal (hair) on your head. If you are not able to fathom that I have such high followers, then understand it. It has taken me 15 years to become Shoaib Akhtar. Yes, I have a huge fan following in India, but I criticised them when they did not play well in the first ODI against Australia," Akhtar said in a video posted on his YouTube channel.
Akhtar enjoys a great following on his YouTube channel, and he often releases video to talk about cricket.
In the recently concluded series between India and Australia, Akhtar released videos to talk about how great of a player Indian skipper Virat Kohli is. The Rawalpindi Express has often released videos talking about the state of cricket in India and Pakistan.
He has often advised Pakistan's management to take cue from Indian management.
"Just tell me one Pakistan YouTuber who does not praise India when their team does well. Ramiz Raja, Shahid Afridi all praise Indian side when they do well. Tell me one thing, isn't it right that the Men in Blue are in fact the number one side in the world, isn't it right that Kohli is the number one batsman in the world," Akhtar said.
"I do not understand what is the problem people have when I am giving my opinion on matters related to cricket. I have played for Pakistan for 15 years, I am not famous for just doing the YouTube thing. I was the fastest bowler in the world," he added.
Akhtar played 46 Tests, 163 ODIs and 15 T20Is for Pakistan. He also has the record of the fastest delivery in international cricket. (ANI)