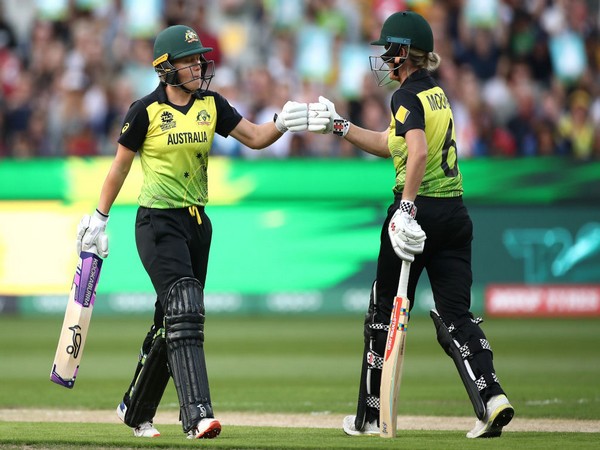 Melbourne [Australia], Mar 8 (ANI): Openers Beth Mooney and Alyssa Healy guided Australia to register the highest total in the final of the T20 World Cup history, including the men's event.

The previous highest total in the history of T20 World Cup final came in 2016 by West Indies men 161/6 against England at Eden Gardens in Kolkata.
Mooney and Healy played knocks of 78* and 75 respectively as Australia set a target of 185 runs in front of India in the ongoing finals of the Women's T20 World Cup.
Opting to bat first, Australia got off to a flier as openers scored 91 runs in the first ten overs of the match.
The duo went on to stitch a partnership of 115 runs, and it saw Healy breaking the record for registering the fastest fifty in the history of ICC event finals.
Healy was finally sent back to the pavilion in the 12th over as she was sent back to the pavilion by Radha Yadav.
Skipper Meg Lanning then joined Mooney in the middle and both batters did not let momentum slide for Australia. The duo registered 39 runs together, but in trying to score boundaries, Lanning (16) and Ashleigh Gardner (0) perished in the 17th over, reducing Australia to 156/3.
In the final two overs, Mooney managed to register boundaries to take Australia's score past the 180-run mark in the allotted twenty overs. For Australia, Mooney and Nicola Carey remained unbeaten on 78 and 5 respectively.
For India, Deepti Sharma scalped two wickets. (ANI)