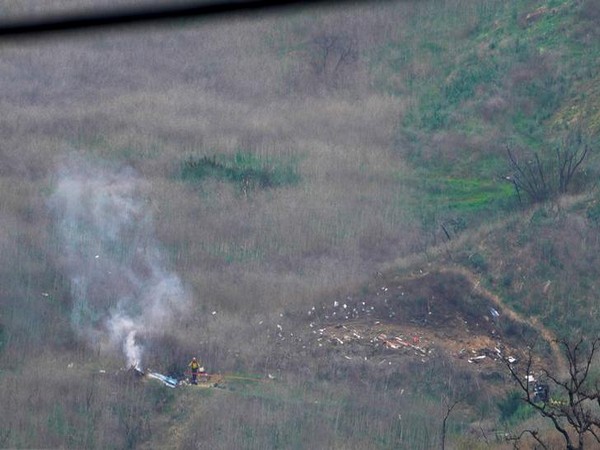 Washington DC [USA], Jan 27 (ANI): American basketball legend Kobe Bryant and his 13-year old daughter Gianna Maria Onore Bryant were among the nine people killed when a helicopter they were travelling in crashed amid foggy conditions and burst into flames in the hills above Calabasas, local media reported.

Bryant, 41, and his daughter were expected at the Mamba Sports Academy in Thousand Oaks for a basketball game scheduled for Sunday afternoon (local time), CNN reported.
Los Angeles County Sheriff Alex Villanueva told reporters that as per a manifest, nine people -- including the pilot -- were on board the helicopter that crashed on a hillside.
No one survived the crash, Los Angeles County Fire Department Chief Daryl Osby said. Officials did not reveal the identity of the victims.
LA County Fire Department Capt. Tony Imbrenda said that they did not immediately have any information as to whether the helicopter radioed a distress signal.
"Individuals that saw the aircraft said it was coming down at a fairly significant rate of speed and impacted the ground on the hillside," he told reporters.
Earlier, the Federal Aviation Administration had said that there were five people on board the S-76 helicopter at the time of the crash.
41-year-old Bryant had won five National Basketball Association (NBA) championships in his 20-year-long career while playing for Los Angeles Lakers.
US President Donald Trump has reacted to Bryant's death, calling it "terrible news".
Former President Barack Obama mourned Bryant's death, describing him as a "legend on the court".
"Kobe was a legend on the court and just getting started in what would have been just as meaningful a second act. To lose Gianna is even more heartbreaking to us as parents. Michelle and I send love and prayers to Vanessa and the entire Bryant family on an unthinkable day," Obama tweeted. (ANI)