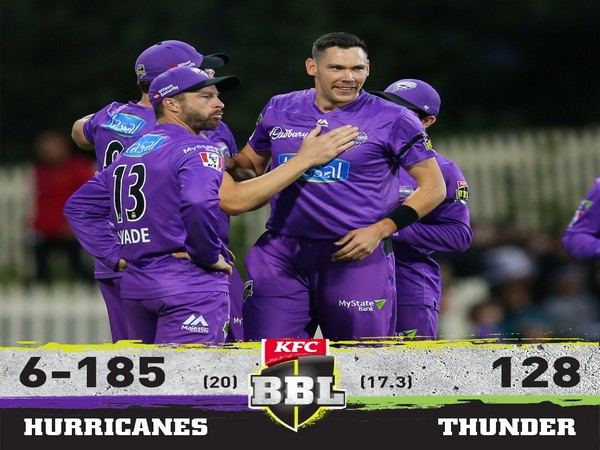 Chasing 186, Thunders got off to a poor start as the side lost its opener Usman Khawaja (3) in the third over.
Skipper Callum Ferguson and Alex Hales then stitched a 46-run stand to revive Thunders' chase. Ferguson departed in the eight over after scoring just 12 runs.
Hales found the support of Alex Ross and the duo whacked boundaries all round the park. The team brought up the score of 100 runs in the 13th over.
However, a splendid bowling performance from D'Arcy Short and a flurry of wickets in the latter half of the innings saw Thunders getting all out at the score of just 128.
Earlier, Hurricanes slammed 185 runs in their quota of 20 overs. George Bailey's onslaught in the death overs helped Hurricanes post a mammoth total after having a bad start. (ANI)