Can understand all criticism coming in my way: SA batsman Temba Bavuma 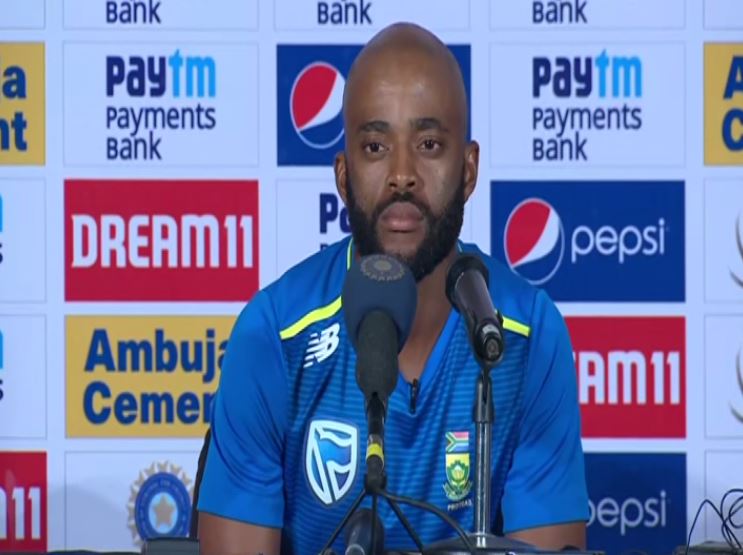 Pune (Maharashtra) [India], Oct 12 (ANI): South Africa batsman Temba Bavuma, who has failed to score runs in the ongoing Test series against India, on Saturday said that he 'understands all the criticism that is coming his way' as batters are judged on the runs they score in their last innings.

"I can understand all the criticism that is coming in my way. As a batter, your current season runs are what on which you are judged. When your performance is not at the level that we saw a custom to South African batters people are gonna come hard," Bavuma told reporters in the post-match conference.
The 29-year-old played a knock of eight runs in the first innings of the ongoing second Test. He scored a total of 18 runs in the last Test including a second-innings duck.
In the T20I series against India, he scored 49 and 27 runs respectively in the second and third games. Both the teams shared the trophy as the series was tied by 1-1, while the first match was washed out due to rain.
"The South African public and fans are very proud and they are used to a high standard of cricket. We as sportsmen represent South Africa country. So we have to deal with the pressure," added Bavuma.
South Africa resumed their first innings from 36/3 on day three with Anrich Nortje and Theunis de Bruyn on the field. However, India did not take much time to get their first breakthrough of the day as Mohammad Shami got hold of Nortje (3) in the third over of the day.
Skipper Faf du Plessis then came out to bat but could not form a partnership with Bruyn as the latter was caught behind off Umesh Yadav's delivery. Bruyn's dismissal brought Quinton de Kock out on the field.
Both Du Plessis and De Kock played cautiously, avoiding any risky shot. The duo provided the Proteas with some momentum as they added 75 runs on the board.
"The top-order batters, the guys who are interested to score the bulk of the runs, it does kind of hurt when you see the lower-order go out and fight it out to do what you are really meant to do. The boys are trying with the bat," Bavuma said.
"Looking forward to the second innings, there is a lot of confidence that we can take. We have to find a way to dominate with the bat as much as India has done so," he added.
Vernon Philander and Keshav Maharaj played steadily and shrugged off some pressure. Both kept the scoreboard ticking and restricted Indian bowlers from taking any wicket.
They formed a 109-run partnership and Maharaj completed his half-century. Finally, in the 102nd over, Ashwin broke the partnership as he got hold of Maharaj (72). Kagiso Rabada was the next batsman but Ashwin dismissed him as well to end South Africa's first innings.
"It was a spectacular effort from Vernon and Maharaj to fight a day out in the middle and to face as many balls as they dealt," Bavuma said.
The day four of the Test will see whether India will come in to bat or hand a follow-on to South Africa as they have a massive lead of 326 runs. (ANI)