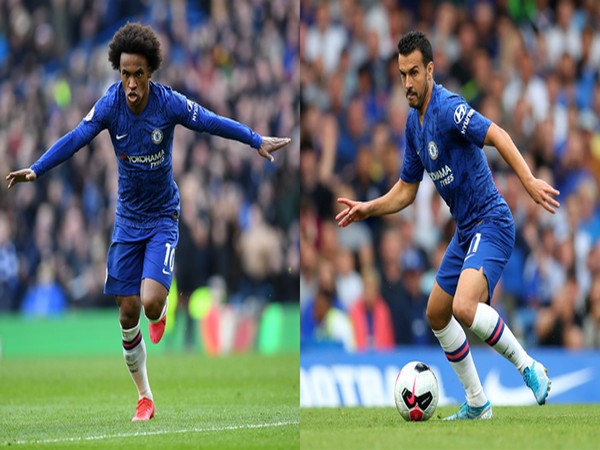 London [UK], June 24 (ANI): Chelsea have extended Willian and Pedro's contracts that allow them to play for the side for the remaining 2019-20 season.

As a result of the global pandemic and subsequent delayed conclusion to the campaign, Premier League clubs unanimously agreed to be allowed to enter into short-term contract extensions with players whose deals were due to expire at the end of this month.

"Willian and Pedro were among those affected, and they and the club have now mutually agreed to extend contracts until the finale of the current season. It means they will be available for our remaining Premier League fixtures in 2019/20, as well as any future involvement in the FA Cup and Champions League," Chelsea said in a statement.
Willian has been a regular under Frank Lampard this season, playing 38 times in all competitions. He has scored seven goals and set up a further six, and earlier this season made his 300th appearance for the club in his seventh year in west London.
The 31-year-old has featured in all league games this season barring the first match at Old Trafford, when a hamstring injury ruled him out.
Willian scored from outside the box in last two fixtures before coronavirus suspended play, the home wins over Liverpool and Everton, and registered a brace in our victory away to Tottenham in December.
So far Pedro has made 18 appearances this season - 13 of them starts - and scored twice, including last fixture before the lockdown break, against Everton. His other goal, a penalty against Grimsby, came on the evening he captained Chelsea for the first time.
The 32-year-old featured in every minute of opening three matches, before a hamstring problem sustained in the warm-up at Carrow Road proved the start of a problematic few months with injuries.
Chelsea are at the fourth spot with 51 points and have eight more games to play this season. (ANI)