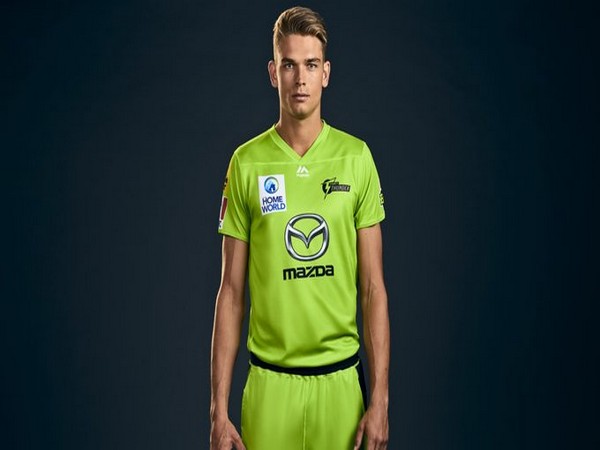 Sydney [Australia], June 24 (ANI): Sydney Thunder all-rounder Chris Green has been cleared to resume bowling after his action was found to be legal following biomechanical testing in Brisbane.

In January this year, Green was suspended from bowling due to an illegal bowling action by Cricket Australia (CA).
He was reported by umpires Nathan Johnstone, Mike Graham-Smith and third umpire Paul Wilson after the Big Bash League (BBL) match between the Thunder and Stars at Sydney Showground Stadium on January 2.
Green was re-tested on June 16 at the National Cricket Centre under the supervision of Dr Luke Kelly, with his off-break and faster ball deliveries under review.
"The assessment revealed that his bowling action is now deemed legal, with all deliveries performed significantly below the allowable 15 degrees of elbow extension," Thunder said in a statement.
"To have to sit on the sidelines and not be able to play or help the team was really difficult. But at the same time, it was also a big factor of my motivation to get back to playing as quickly as possible," Green said.
"I am very grateful for all the support from the Thunder and Cricket NSW coaches," he added.
The 26-year-old is now eligible to bowl in all Cricket Australia competitions.
"I feel like I'm in peak physical condition, my batting is going really well and now I'm really excited to get back bowling competitively again," Green said.
"I just can't wait to play again. I'm so excited to get back out on the field and repay the faith that has been shown in me the best way I know how - by putting out my best effort," he added.
Cricket NSW Pathways and Assistant Coach Anthony Clark worked with Green on his spin bowling.
"Chris is an absolute pro. He worked really hard in training and full credit should go to him. I'm really glad that he's able to bowl again," Clark said.
Green has played 48 games for Thunder since signing a record-breaking six-year deal with the club, taking 33 wickets at an economy of 7.06 and scoring 351 runs at an average of 18.47. (ANI)