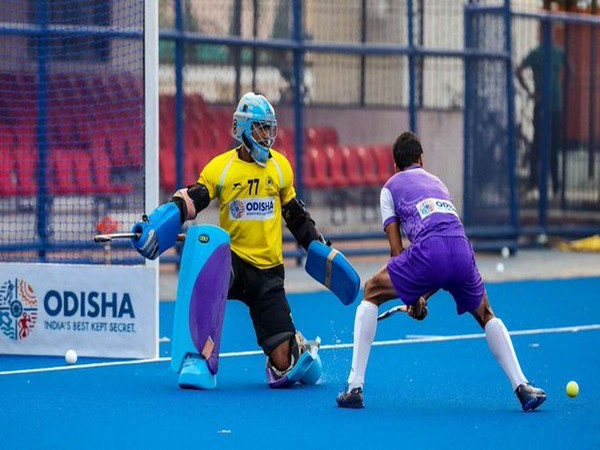 New Delhi [India], July 3 (ANI): Indian hockey team goalkeeper Suraj Karkera said it was a difficult time for him to not play for the team for a long time but consistent hard training at National Coaching Camp has kept him motivated.

Karkera played his last match for India at the Tokyo 2020 Olympics Test Event in August 2019. Since then, PR Sreejesh or Krishan B Pathak has been guarding the posts for the national team.
"It has been difficult to be on the sidelines for a long time, but I am sure my chances will come. Sreejesh and Krishan have been keeping very well in the last few tournaments and that's great for the Indian team. I have continued to put in the hard yards during the National Coaching Camps and that's what has kept me motivated so far. I just want to keep honing my skills and be absolutely ready when an opportunity is presented to me," Karkera said.
The goalkeeper chose to stay at the Sports Authority of India (SAI) Campus, Bengaluru even after Hockey India announced a month-long break for all members of the men and women's core probables group on June 19.
He had to take the tough decision of not going back to Mumbai since his city is one of the worst affected in India as far as the COVID-19 pandemic is concerned.
"I spoke to my parents once the month-long break was announced. They asked me if I could stay back at the SAI campus because the situation isn't great in Mumbai. After thinking about our safety, my parents and I decided that it's best for me to stay back here, even though my teammates had decided to leave. It's been challenging without my teammates, but they all have been staying connected with me through phone calls. I meet some of the support staff members during the day, so it's been fine here at the campus," the 24-year-old said.
The goalkeeper expressed that adapting to a tough situation due to the COVID-19 pandemic was a big challenge and the situation taught the players how to stay mentally strong in difficult times.
"It was certainly a challenge adapting to the lockdown. The situation taught us how to be mentally strong by maintaining our fitness and dribbling with our hockey sticks in our rooms. Everyone adapted to the situation in the best possible way. I have been reading a lot of motivational books to draw positivity. I have some time to catch up on many TV shows as well during this period. We kept ourselves busy with many activities during the lockdown," Karkera said. (ANI)