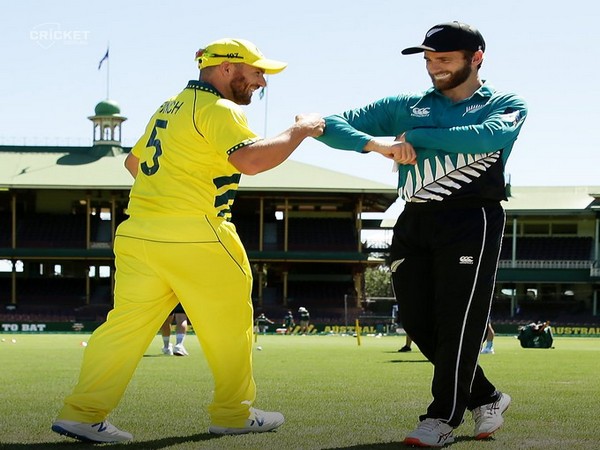 Sydney [Australia], Mar 13 (ANI): During the first ODI of the three-match series between Australia and New Zealand, skippers Aaron Finch and Kane Williamson ditched handshakes, and opted for elbow taps amidst the coronavirus outbreak.

Both skippers had a laugh after that.
When the toss happened, both skippers did shake hands, however, immediately after, both Finch and Williamson laughed it off after doing so.
"A handshake out of habit, and then a quick joke, between the skippers #AUSvNZ," cricket.com.au tweeted.
[{8852a8ca-54b9-4010-9d22-1bded927f2fc:intradmin/finch.JPG}]
Due to the coronavirus outbreak, most people are avoiding handshakes and are opting for fists bumps or 'Namaste'.
In the ongoing first ODI, Australia won the toss and opted to bat first. The entire series between both countries will be played behind closed doors due to coronavirus outbreak.
Before the start of the match, Australia was given a blow as Kane Richardson pulled out of the match. The pacer has been quarantined and tested for COVID-19 after reporting a sore throat.
His results are still awaited.
Australia playing XI: Aaron Finch (c), David Warner, Steve Smith, Marnus Labuschagne, D'Arcy Short, Mitchell Marsh, Alex Carey (wk), Pat Cummins, Mitchell Starc, Adam Zampa, Josh Hazlewood
New Zealand playing XI: Martin Guptill, Henry Nicholls, Kane Williamson (c), Ross Taylor, Tom Latham (wk), Jimmy Neesham, Colin de Grandhomme, Mitchell Santner, Ish Sodhi, Lockie Ferguson, Trent Boult.
Australia was recently white-washed by South Africa in the three-match ODI series, while New Zealand white-washed India in the 50-over format. (ANI)