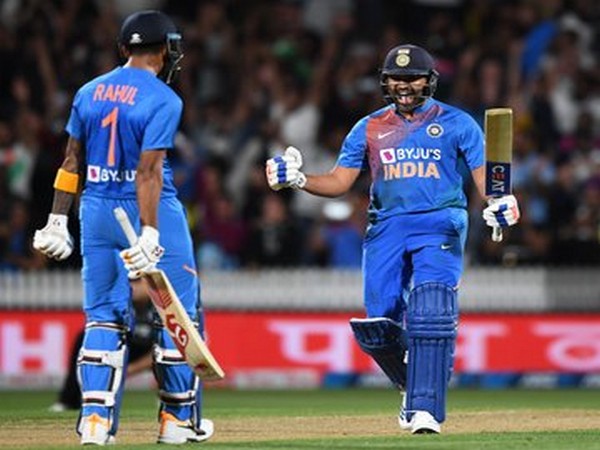 India defeated New Zealand in a thrilling super over in the third T20I of the series at Seddon Park.
In the super-over, New Zealand posted a target of 18 runs for India. The team scored three runs in the first two balls. With 14 runs required from 3 balls, Rohit Sharma smashed two sixes on the last two balls propelling India to a victory.
Earlier, With just nine required in the last over, Mohammed Shami gave just eight runs and dismissed Kane Williamson and Ross Taylor, leading to a tie.
"What an incredible win. Mohammad Shami exceptional to defend 2 of the last 4 balls in the main game and #RohitSharma showing once again why he is one of the most dangerous batsman in the world. A match to remember for a long long time #NZvIND," former cricketer VVS Laxman tweeted. 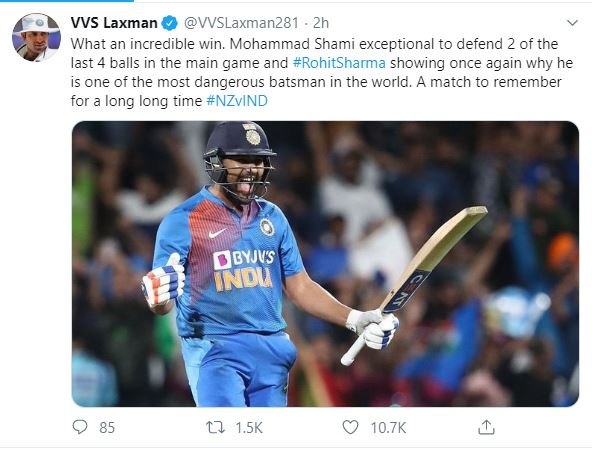 Virendra Sehwag took to Twitter and wrote: "Aisa lagta hai apunich Bhagwan hai !So fit for #RohitSharma the way he has made impossible tasks possible. But defending 2 runs of 4 balls was an unbelievable effort from Shami. Yaadgaar hai yeh jeet #NZvIND." 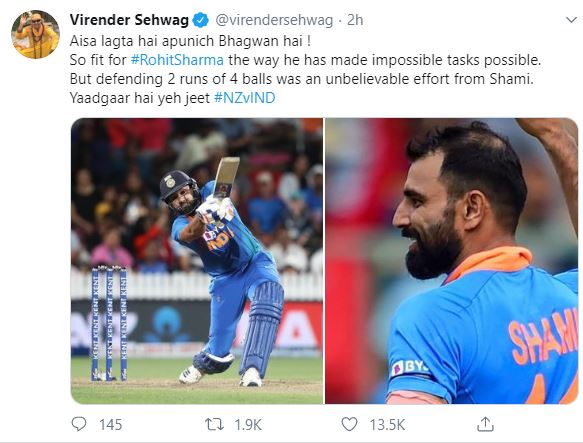 Indian spinner Ravichandran Ashwin tweeted, "Great game of cricket and @ImRo45 was ice cool to take us home in the super over. #indvsnz,"

"When it was so easy to give up wid 2 needed of 4 balls, Shami bowled incredibly & match ended in a tie. Then, with 10 reqd of 2 balls in the Super Over #Hitman proved why he is a modern-day great. Like Sport very often teaches, we learnt a valuable lesson- NEVER GIVE UP! #NZvInd," former cricketer Mohammad Kaif tweeted. 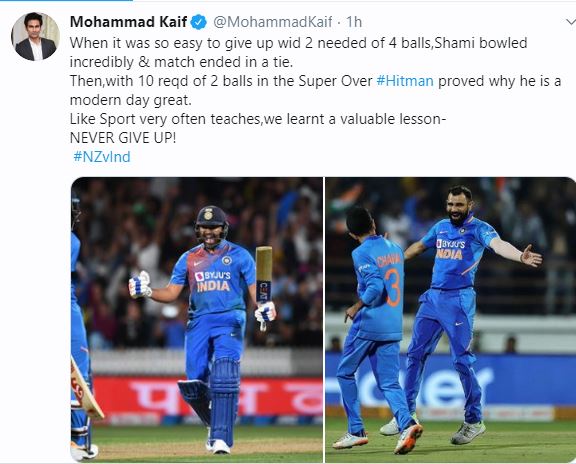 Former cricketer Irfan Pathan also applauded Team India's performance against the Blackcaps.
Earlier, Rohit Sharma knock of 65 runs powered India to 179/5 in 20 overs. New Zealand with the help of Williamson's knock of 95 runs tied the match and the game went into the super over.
Both teams will take on each other in the fourth T20I on Jan 31 at Wellington. (ANI)