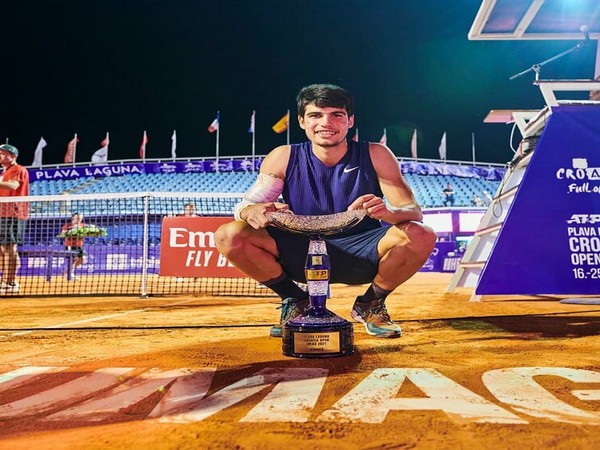 The teenager defeated former World No. 7 Richard Gasquet emphatically 6-2, 6-2 to triumph at the Plava Laguna Croatia Open Umag. Alcaraz is the youngest tour-level champion since 18-year-old Kei Nishikori emerged victorious in Delray Beach in 2008.
"It's amazing. I have a lot of emotions. I'm really, really happy with this victory, this win, my first ATP [title]," ATP Tour quoted Alcaraz as a saying. "I'm going to enjoy this moment a lot."
The Spaniard crushed a final forehand winner to close out his victory before launching a ball high into the Croatian night. Alcaraz's coach and mentor, former World No. 1 Juan Carlos Ferrero, rose from his seat and pumped his fist while sporting a wide smile across his face to celebrate his charge's breakthrough. Shortly thereafter, the pair shared a warm embrace.
Alcaraz has had plenty of eyes on him since bursting onto the ATP Tour in Rio de Janeiro in 2020 when he also won three ATP Challenger Tour titles. It was a matter of when, not if he would position himself for tour-level glory. And on his first opportunity, the teen showed no nerves. The seventh seed overwhelmed the 15-time ATP Tour titlist with impressive power and poise over one hour and 17 minutes.
"I had a lot of good moments in this tournament. I beat five great tennis players," Alcaraz said. "I think that I grew up a lot in this tournament and I keep a lot of experience from this tournament. It's going to be useful for the future." (ANI)