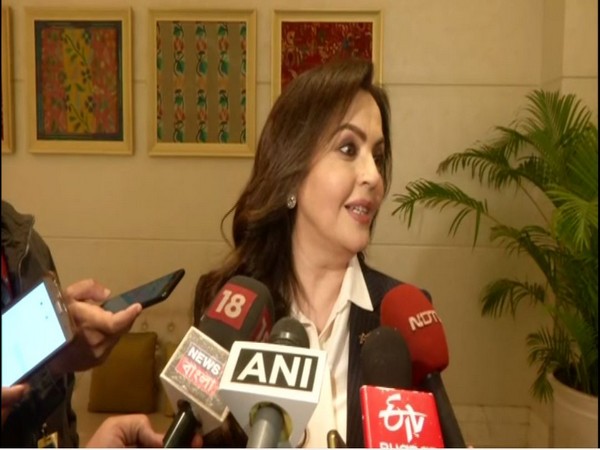 New Delhi [India], Mar 12 (ANI): As the Indian Super League finals between ATK and Chennaiyin FC will be played behind closed doors amidst coronavirus outbreak, Nita Ambani, the founder chairperson, Football Sports Development Limited on Thursday said that the decision was taken looking at public interest.

"We were as excited as the fans for the finals, but in the public interest and for the safety and health of the fans, we have decided to host the finals behind closed doors," Nita Ambani said in an official statement.
"The Indian Super League 2019-20 season has witnessed high intensity, great sportsman spirit, and tremendous fan excitement. We have received immense love and support from fans throughout the season and witnessing passionate fans cheering their teams is truly an overwhelming sight. The final in Goa would have been no less," she added.
Earlier, the organisers of the ISL informed that the finals will be played behind closed doors and the process of ticket refunds will soon be initiated.
The development came a day after the World Health Organisation (WHO) declared coronavirus a global pandemic, and against the backdrop of the Central government suspending all visas to April 15 as part of the measures to contain the spread of novel coronavirus.
The Health Ministry has also advised all the federations to avoid large gatherings.
Earlier in the day, Kiren Rijiju, the Union Minister for Youth Affairs and Sports revealed that all international sporting events have been temporarily suspended in the country amid the coronavirus outbreak.
All the international sporting events that were scheduled in the country have been temporarily suspended. So far as domestic tournaments are concerned, we are advising everyone to follow the guidelines issued by the Health Ministry and try to avoid mass gatherings," Rijiju told reporters.
"Everyone should look to follow these instructions as the health of everyone is important. Around the world, matches are taking place but they are doing it behind closed doors," he said. (ANI)