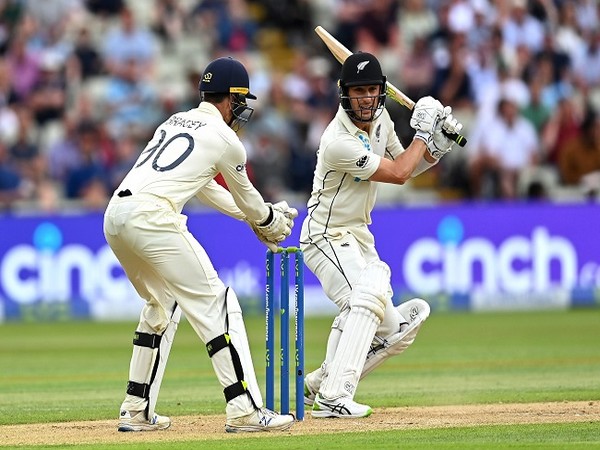 Edgbaston [UK], June 12 (ANI): Dan Lawrence picked a wicket just before the close of the second day's play to give England some hopes in the ongoing second Test against New Zealand on Friday.

Will Young was dismissed for 82 in the last over of the day to give Lawrence his maiden Test wicket as New Zealand ended day two at 229/3. The Kiwis are still trailing by 74 runs with veteran batsman Ross Taylor unbeaten at 46.
The hosts began the second day with three wickets in hand and after some delightful strokes in the morning Mark Wood (41) departed in the 96th over.
In the few minutes, Stuart Broad and James Anderson were also dismissed, leaving Dan Lawrence stranded on 81* as England was folded for 303 before lunch.
In the first session, New Zealand scored 43 runs for the loss of one wicket after England was bowled out. Skipper Latham departed after scoring six runs.
Devon Conway continued his impressive start in Test cricket and in the second session, New Zealand added 87 runs as England struggled to find a breakthrough. An unbeaten 115-run stand between Conway and Young took New Zealand to 130/1.
In the third session, Broad removed the dangerous-looking Conway before the batsman could complete his ton. Meanwhile Young hit his maiden Test fifty to help New Zealand get past 200.
However, Lawrence dismissed Young in the dying minutes of the day to give some hope to England.
Brief Scores: England 303 (Rory Burns 81, Dan Lawrence 81, Ajaz Patel 2-34); New Zealand 229/3 (Devon Conway 80, Will Young 82; Stuart Broad 2-22) (ANI)