England on top against SA after stumps on day two 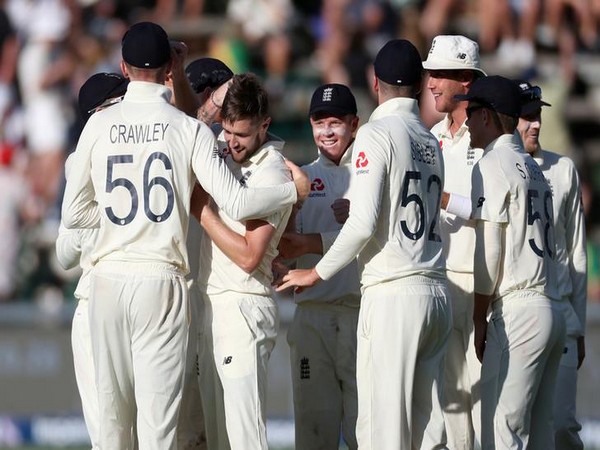 Johannesburg [South Africa], Jan 25 (ANI): South Africa ended day two of the fourth and final Test at 88/6 against England on Saturday here at the Wanderers.

The hosts currently trail by 312 runs after bundling out England for 400.
South Africa's openers Dean Elgar and Pieter Malan put on 29 runs for the opening wicket, but England finally got the breakthrough of Malan (15) in the 19th over.
After Malan's dismissal, England got the breakthroughs of Rassie van der Dussen (0) and Dean Elgar (26), reducing England to 43/3.
Faf du Plessis and Quinton de Kock then put on 17 runs for the fourth wicket, but Chris Woakes provided the key wicket of du Plessis (3) and South Africa was left starring down the barrel at 60/4.
Soon after, Temba Bavuma (6) was sent back to the pavilion by Mark Wood and England looked in firm control of the match. In the dying moments of the day, Proteas lost the wicket of Anrich Nortje (6) to finish the day at 88/6.
Resuming day two at 192/4, overnight batters Joe Root and Ollie Pope added 66 more runs to the total. However, South Africa finally got the breakthrough in the 70th over as Pope (56) was clean bowled by Nortje.
After Pope's dismissal, Nortje dismissed Root (59) and Sam Curran (0), on successive deliveries in the 74th over. Jos Buttler (20) and Chris Woakes (32) added 40 more runs to the total, but both of them soon after, reducing England to 318/9.
Stuart Broad (43) and Chris Woakes (35) added 82 runs for the final wicket. England was finally bowled out for 400.
Nortje was the pick of South African bowlers as he scalped five wickets. (ANI)