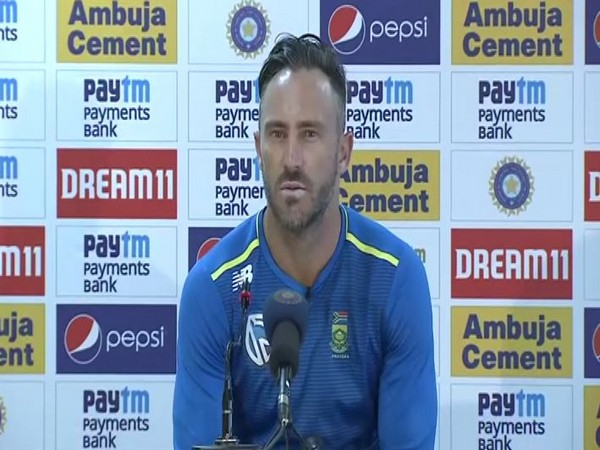 Pune: Ahead of the second Test against India, South Africa skipper Faf du Plessis is hopeful that the pitch will have a more spinning condition than the first Test.

"I know Indian conditions quite well, the turf is a little bit more red here and in terms of that, it is generally more spinning condition. So, expecting the ball to spin more than the first Test," Faf du Plessis told reporters.

Proteas lost the inaugural Test of their World Test Championships (WTC) against India by 203 runs. India showcased a spirited performance in the first Test as Rohit Sharma hit centuries in both the innings while spinner Ravichandran Ashwin grabbed eight wickets. Left-arm spinner Ravindra Jadeja bagged six wickets in the match.

"Extremely hot conditions, we spent a lot of time in the field. And the thinking is to be fresh as I said in the previous Test match. There is not enough time to find your answers in the nets now," Du Plessis said.

"The work has been done before the series so it's about trusting that. Today everyone got a good practice, we took a little bit longer than usual as there were only two nets available. The general feeling in the camp is to be fresh for the five days," he added.

The 35-year-old skipper wants to win the toss in the second Test so that they can put pressure on the Indian side.

"I think it is obvious in saying that in every Test match we would like to start well. Even start a Test match ahead of India that would be nice. We as a team are very resilient and we always make a comeback," Faf du Plessis said.

Talking about the WTC points distribution criteria Du Plessis said: "It is complicated. Obviously the shorter the Test series the more points you get. In two Tests you get 120 points and in the five-match series, you have to win 5-0 to get 120 points which is a bit harder. I have noticed that in this thing you always find holes and flaws in the systems, it is never gonna be a perfect system."

India and South Africa will face each other in the second Test of the three-match series at Pune from October 10.