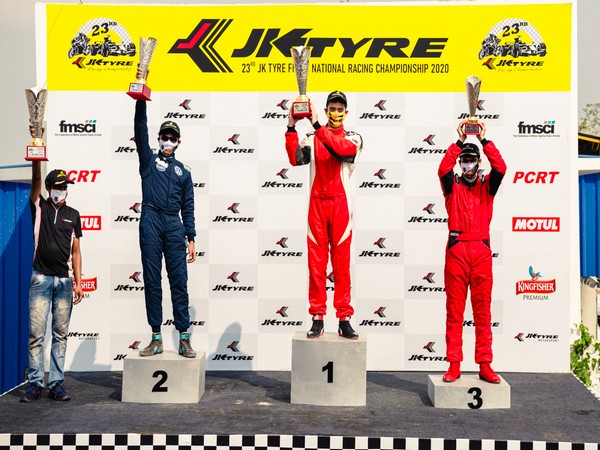 Coimbatore (Tamil Nadu) [India], January 23 (ANI): Teen sensation Amir Sayed from Kottayam once again set the Kari Motor Speedway ablaze. The 16-year-old, competing in the JK Tyre FMSCI National Racing Championship for the first time, sealed the Novice Cup category championship on Saturday. Even though with two more races to go, by winning all the 10 races so far he has ensured no one can surpass him.

"It has been a fantastic two days for me and I am thrilled. However, I would like to try and win the two remaining races as well on Sunday," said the teenager, who comes from a motorsports family. His father Sayed Senior was a rally driver many years ago.
Amir Sayed has shown confidence all through this championship. In the first round, held at the same venue last month, the youngster showed he had speed and control, the last two days he has been sensational.
On Friday and a warm Saturday in bright sunshine, Amir soaked in the pressure well. He knew he was the favourite. Sitting inside the 1300cc engine which generated considerable pace on a track that was resurfaced recently, he was in total control.
During Covid-19 lockdown, the Kari Motor Speedway has undergone a massive facelift. The surface has been redone as a result of which the drivers were able to get a better grip. Race director Rajan Syal spoke of how the drivers felt better now.
"There has been an improvement in the track conditions and the timings reflect it," said Syal. Earlier, the track length was 2.1 km, which has now been increased to 2.6 km in surroundings that are pleasant and bucolic.
In the Formula LGB 4 category, Ashwin Datta from Chennai showed he is a man in rich form and with a penchant for speed. There were two races on Saturday and Ashwin finished first in one and second in the other race. He is in a very good position to seal the championship (aggregate 57 points) but does not want to talk about it.
"I like to focus from race to race and not on the overall championship and points etc. I am happy for myself and my team Dark Don as we have been very dominating on the track," said 22-year-old Ashwin.
He recently took his BBA final semester exams and said the time he spends in racing is valuable. "I have raced in Chennai as well as in Coimbatore. Yes, the year behind (2020) was tough because of Covid-19 but I believe in positivity. One cannot be thinking about anything negative in racing. My mantra is to focus on the race and give it the best shot," he said.
On Friday and Saturday, both man and machine were tuned to a nicety. His familiarity with the tracks, testing corners, and technical understanding of the layout helped him race with finesse. He did not want to talk about sealing the Formula LGB 4 championship on Sunday, though. "I would like to focus on the remaining two races," he said.
Meanwhile, Mira Erda from Vadodara escaped unscathed in a scary racing incident on Saturday morning. Mira's Formula LGB 4 car was hit from behind by Akshay Kapoor. Her car went out of control and turned turtle. She stood up in no time, much to the relief of all the officials watching it unfurl in the Race Control room.
"This was my first accident and when I was taken to the medical room for a check-up, I was not worried. They checked my BP which was normal. The pulse was a bit high but I am fine. I did not panic, as I knew help was coming in," she said. She was again behind the wheels in her car in the afternoon showing how strong she is mentally. (ANI)