Former India cricketer VB Chandrasekhar, who died at the age of 57 in Chennai on August 15 leaving the cricket fraternity in shock, had allegedly committed suicide. Earlier it was reported that he had died of a heart attack.

Media reports quoted Mylapore police confirming that the cricketer had taken his own life. "He was under pressure on account of his financial situation. He had invested Rs 3 crore in the Kanchi Veerans TNPL team. A month ago, he had received a notice from the bank. He had accrued a lot of debt. He had mortgaged his house too. He even had tea with his family at around 5: 45 pm before going to his room," investigating official Senthil Murugan said.

Chandrasekhar was an aggressive opening batsman and played a vital role in the Tamil Nadu's second Ranji Trophy title in 1987-88.

"Extremely sad & shocked to hear about the passing away of VB Chandrasekhar sir. His consistent efforts made it possible to set the right foundation of the CSK team. He always encouraged & believed in us since the very beginning. My deepest condolences to the family," Suresh Raina tweeted. 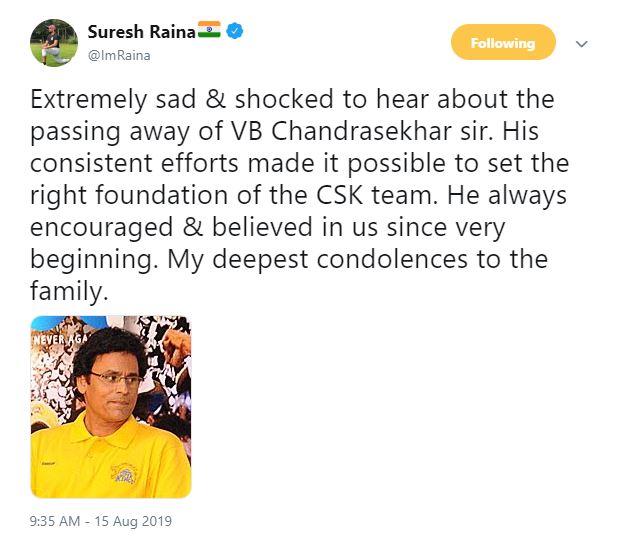 "Deeply saddened and shocked to know about the demise of my good friend VB Chandrashekar. Heartfelt condolences to his family. May his soul RIP," VVS Laxman tweeted.

"Shocked! to hear about #VBChandrasekhar sir. My heartfelt condolences to the family and friends. #OmShanti," Pragyan Ojha tweeted.

"BCCI regrets to inform that former India opener VB Chandrasekhar is no more. Our heartfelt condolences to his family, friends and his fans," BCCI tweeted.

"Very sad to hear the news of VB Chandrasekhar passing away. He was supposed to work the @TNPremierLeague final tonight. Sad times at Chepauk this evening," Scott Styris tweeted.

Remember the days VB and Srikkanth used to open the batting for Tamil Nadu. Often VB would outscore Srikkanth and they used to match each other shot for shot. Swashbuckling was the word for VB. Fearless and often batted without a helmet against the quicks. #vbchandrasekhar .

The Members and Cricket Fraternity of the Tamil Nadu Cricket Association offered their condolences to the sudden and sad demise of VB.

“VB” as he is affectionately called was born on 21 st August 1961 was a aggressive batsman and in the 1988-89 Irani Trophy game against the Rest of India at Chennai, he reached his 100 off just 56 balls, then the fastest hundred in first-class cricket by an Indian. This knock brought him into the limelight and he was included in the Indian team for the one-day internationals against New Zealand.

My deepest condolences to the family of VB Chandrasekhar. May your soul RIP Sir.

Shocked to hear the news of the passing of former Indian Cricketer VB Chandrasekhar...soo knowledgebale , calm and had such a great sense of humor. In fact we were having a few laughs on Monday in Tirunelveli #tnpl. #Sad Rest in peace VB bro !!!

R.I.P #VBCHANDRASEKHAR Still remember the day he trained at Guru Nanak. It was my first day and he was teaching me how to drive the ball. Devastated to hear that he's no more... pic.twitter.com/UIXrl9i0TW

In his illustrious career he served as a National selector, Chairman of State Senior Selection Committee and State Coach. VB was employed with the India Cements and was also the first Operations Director of Chennai Super Kings. He was the owner of VB Kanchi Veerans a TNPL Franchisee and a reputed Commentator.

His mortal remains will be placed at his residence No:12, Visveshwarapuram, Mylpaore, Chennai 600004, from 03.00 pm, 16th August 2019 and his final rites will commence at 09.00 am on Saturday, 17th August 2019 at the Mylapore Crematorium, behind IG’s Office. He is survived by his wife and two daughters.