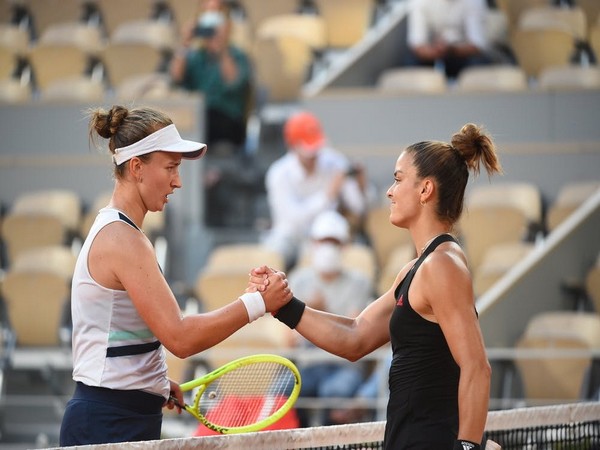 Paris [France], June 11 (ANI): Tennis star Maria Sakkari is proud of her historic run in this year's French Open. In what turned out to be a rollercoaster of a semi-final, Barbora Krejcikova ousted No.17 seed Maria 7-5, 4-6, 9-7 to reach her maiden Grand Slam singles final.

"I have to be deadly honest: I got stressed, starting thinking that I'm a point away from being in the final," the 25-year-old Sakkari confessed in a post-match conference.
"I guess it's a rookie mistake. Good thing is that if I give myself a chance again to be in that position, then I know that I don't have to do it again," continued Maria, who had a match point at 5-3 in the decider.
As the first Greek woman to ever reach a Grand Slam semi-final, Sakkari has plenty to be proud of.
"I'm proud of my run here, but it hurts," she said. "Today's loss hurts a lot because I was so close. I was just one point away. But what can you do? There are lots of positives and some negatives, as well. I just have to embrace it and just move forward and see how am I going to do it the next time."
Unseeded Krejcikova who saved a match point against Maria will now face Russia's Anastasia Pavlyuchenkova, the No.31 seed, in the final of the French Open.
This spring has been remarkable for the Czech in all terms. As a former doubles world No.1, Krejcikova had never won a singles title until two weeks ago, when she claimed the trophy in Strasbourg, on the eve of the French Open.
Now, riding a career-best 11-match tour-level winning streak, she'll aim to become the first woman to hoist the Coupe Suzanne-Lenglen after a saving match point in 16 years. Still alive in the doubles draw, this means she could become the first woman to claim the singles and doubles titles in Paris since Mary Pierce in 2000. (ANI)