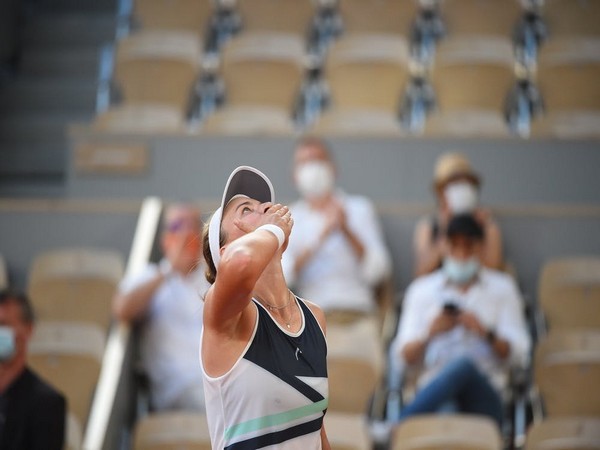 Paris [France], June 11 (ANI): Barbora Krejcikova remembered her mentor Jana Novotna after she booked a spot in the French Open final, where she will now face Russia's Anastasia Pavlyuchenkova, the No.31 seed. Unseeded Barbora ousted Maria Sakkari 7-5, 4-6, 9-7 in a nerve-wracking semi-final to reach her maiden Grand Slam singles final.

Over the course of these last few years, Krejcikova time to time has made it clear that her relationship with the great Jana Novotna has played a pivotal role in her success.
The Czech legend, who coached Krejcikova from 2014 to 2017 before passing away after a battle with cancer in November 2017, is revered by those who knew her and widely adored in the tennis community. Her legacy continues to grow further now, thanks to the success of Krejcikova.
After the dust settled on Court Philippe-Chatrier, Krejcikova made sure not to leave the stadium without paying tribute to the decorated Hall-of-Famer, who won the 1998 Wimbledon title as well as 12 Grand Slam doubles title and another four in mixed.
"From upstairs, she's just really looking after me," Krejcikova told the crowd. "I really miss her and I really want to thank her -- because of her I'm here."
Czech who saved a match point against Sakkari continues her Cinderella run to the final of the French Open. As a former doubles world No.1, Krejcikova had never won a singles title until two weeks ago, when she claimed the trophy in Strasbourg, on the eve of the French Open.
Now, riding a career-best 11-match tour-level winning streak, she'll aim to become the first woman to hoist the Coupe Suzanne-Lenglen after saving match point in 16 years. Still alive in the doubles draw, this means she could become the first woman to claim the singles and doubles titles in Paris since Mary Pierce in 2000.
This weekend in Paris, Krejcikova is all geared up to savour a once in a lifetime moment she feels has been a long time coming.
"I always wanted to play matches like this," she said. "I always wanted to play tournaments like this, big tournaments, big opponents, last rounds. It was always something that I wanted to achieve. It was just taking so long." (ANI)