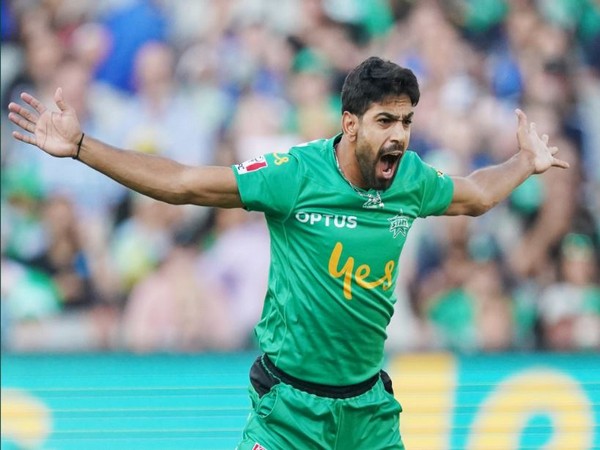 Lahore [Pakistan], June 18 (ANI): Pakistan pacer Haris Rauf, who was picked in the 29-member combined squad for England tour, said he is not leaving any stone unturned to play Test cricket against England.

Rauf had a great stint for Melbourne Stars at the Big Bash League (BBL), picking up 20 wickets in 10 matches. But the story was different in the first-class cricket, with only 74 overs to his name since he made his debut in September 2019. The Pakistan selectors kept the faith in him and awarded him a contract under 'Emerging Players' along with Haider Ali and Mohammad Hasnain.

"I made my mind properly that I am going to play Test at any cost. I am putting all my efforts to earn it. I am all in for it. I not only ready but very much excited to take a lot out of this [England] tour. Whatever I will get, I will make most out of it," he said in a video conference.
"The way I got a start in white-ball cricket, I wish to make a name for myself in red-ball cricket. It's a long tour and a big opportunity for me. I have done well in T20 cricket but now I want to look beyond that. I know I haven't got experience under my belt and played three first-class matches only, but I know how to bowl longer spells. In Australia, playing premier club cricket, I did play four-day games so I have an idea of what it takes," Rauf said.
The 26-year-old speedster has only featured in 2 T20Is for Pakistan and scalped two wickets. Rauf is yet to make his debut in ODI and Test cricket. He shared his experience of training under one of the greatest pace bowler Waqar Younis during the Bangladesh series.
"I worked with Waqar Younis in the nets session during the Bangladesh series; I learnt several new things and going forward, I am sure this learning phase will continue. I have weaknesses but I have the skill as well and you have to enhance it every day," he said.
"There were things - using the crease and reverse yorkers - that I didn't know about but Waqar bhai helped me. The process of how to bowl those yorkers and the control he had, I'll never able to have that control ever. So I am asking a lot of questions and working with him; learning all these new things is very exciting. This will only be an advantage for me in international cricket," he added.
Pakistan will play three Tests and as many T20Is against England in bio-secure environment commencing from July 30. (ANI)