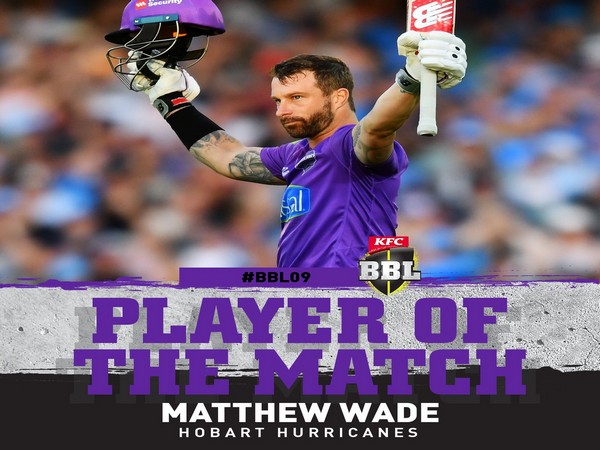 Chasing 218, Strikers suffered an early blow as Jake Weatherald (2) was dismissed by Clive Rose in the second over of the innings.
Travis Head then joined Philip Salt at the crease. The duo looked impressive and kept the team ahead of the asking rate. Both brought up fifty runs stand between them in the 7th over.
Wade went smashed his fifty off 24 balls in the seventh over. However, in the 10th over Scott Boland dismissed Salt (66), breaking the 79 runs stand.
Head and Alex Carey kept the run-chase alive and took the score past the 140-run mark in 14th over. Scott Boland dismissed Head in the 15th over, reducing the side to 142-3. Head played an innings of 47 runs off 37 balls.
Strikers lost a flurry of wickets and side at one point was on 191-6. Carey got out after playing an aggressive knock of 39 runs off 24 balls, with 27 runs left to be chased in 10 balls. The striker failed to chase to target and were bundled out on 206.
Earlier opting to bat first, Hurricanes had a splendid start as both openers Matthew Wade and D'Arcy Short took the side to fifty runs mark in just five overs.
Wade and Short smashed bowlers out of the part as the team racked up 100 runs mark in ninth over of the innings. The duo was in sublime touch as they brought up their individual half-centuries.
The 32-year-old Wade continued to dominate the Strikers and smashed his maiden T20I hundred in 48 balls in the 16th over of the innings.
The 203 runs stand for the first wicket was broken by Michael Neser in the 19th overs as he dismissed Short (72). Ben McDermott then joined Wade and powered the side to a huge score of 217 runs in 20 overs.
Matthew Wade, who played a knock of 130 runs, was adjudged as the player of the match. (ANI)