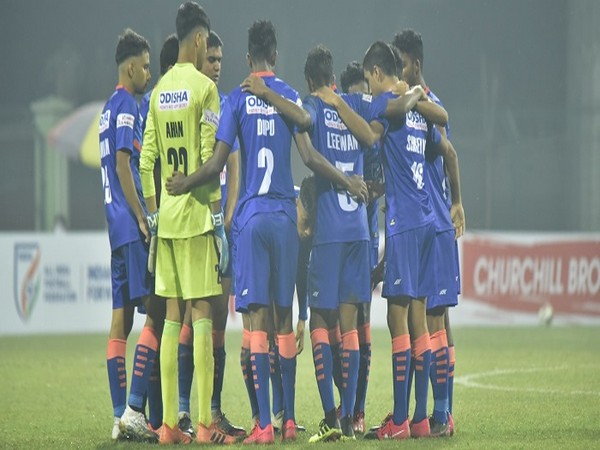 Kolkata (West Bengal) [India], January 13 (ANI): The Indian Arrows will lock horns against Sudeva Delhi FC in the ongoing I-League in an all-Indian clash at the Kalyani Municipal Stadium on Thursday.

Both Arrows and Sudeva Delhi FC lost their opening game of the season and while Sudeva suffered a narrow 1-0 defeat to Mohammedan SC, a courageous performance by the Arrows saw them go down 2-5 versus Churchill Brothers.
Both teams, which are composed of all Indian players, would be looking to put some points on the Hero I-League table.
"It was a tough match against Churchill but a great learning experience for our boys. For 90 per cent of our team, it was the first match in the Hero I-League and I am very happy how the boys reacted after the first goal. They immediately went on the attack and even took the lead," AIFF quoted Head Coach of the Indian Arrows Venkatesh Shanmugam as saying.
"The first half for us was very positive. However, in the second half, we lost the lead and the match. Going forward, this side will build on the foundations that we have laid and will fight in every match," said the former India captain.
"It is a unique game against Sudeva Delhi FC because they are also an all-Indian side. We have no excuse for tomorrow's match as there is no pressure on our boys. There are some ex-Indian Arrows players in Sudeva Delhi FC and as a coach, I am looking forward to the match tomorrow," Venkatesh added.
Forward Gurkirat Singh, who scored from the spot against Churchill Brothers informed, "Sudeva Delhi FC will be a very challenging team for us as they also have an all-Indian squad. However, we would like to give our cent per cent and grab a win."
"Our first half against Churchill Brothers was very good, but in the second half, we lost the match. We need to be wary of our defensive performance. However, we have prepared well and look forward to the clash," he added.
Meanwhile, Sudeva Delhi FC's Head Coach Chencho Dorji said, "Indian Arrows have the capacity of pushing us for the entirety of the match. They are young and very energetic, plus they are technically sound."
"We cannot take them lightly and we have to be more mature on the pitch and fight for the win. It will not be an easy match for us by any standards. Their number 12 (Gurkirat Singh) is one to watch out for," said Dorji. "We have to be on our toes if we are to win the match. The fact that it is an all-Indian clash makes things even more interesting for both teams. We cannot afford to lose against the Arrows," Dorji added.
Midfielder Kean Lewis informed, "Creating chances is a positive sign, but if we don't finish, we won't be able to get the points. We have to be more clinical in front of the goal and aim to get the early goal in the next match." (ANI)