I will definitely play in Paris Olympics and give it my best, says PV Sindhu 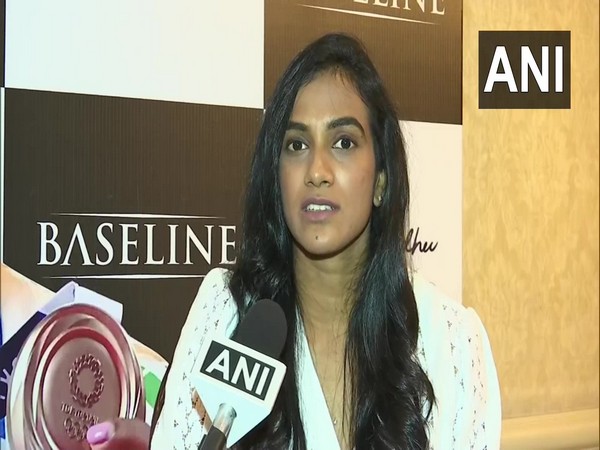 New Delhi [India], August 4 (ANI): India shuttler PV Sindhu has made it clear that she will not be resting on past laurels and is already looking to give it her best at the 2024 Paris Olympics. Having returned to the country after clinching bronze at the ongoing Tokyo Olympics, Sindhu said she is enjoying herself and wants to keep improving.

"I will definitely play Paris (2024 Olympics) and will give my best and play 100 per cent. We have a lot of time. Currently, I'm enjoying the moment and cherishing it," she told ANI on Wednesday.
Sindhu said she has learnt from every coach she has trained under and is thankful to all of them for helping her improve with every passing day.
"I learned a lot from every coach. Every coach has different skills and different techniques. It's very important you grab as much as you can and utilise it whenever needed. I'm very thankful to each one of them. This time we've got enough time to focus on techniques and skills," she explained.
Union Minister of Youth Affairs and Sports Anurag Thakur on Tuesday felicitated PV Sindhu. In felicitating Sindhu and her coach Park Tae Sang at a warm ceremony, Thakur was joined by Union Finance Minister Nirmala Sitharaman, Union Minister of Culture, Tourism, and Development of North-Eastern Region G Kishan Reddy and Minister of State of Youth Affairs and Sports Nisith Pramanik, Secretary Sports, Ravi Mittal and senior officers of the Sports Ministry.
Sindhu's parents P Vijaya and PV Ramana travelled from Hyderabad to be part of the programme. Members of Parliament Shyam Bapu Rao, Bandi Sanjay Kumar, Arvind Dharmapuri, and TG Venkatesh also graced the event.
Speaking at the event, Thakur said, "PV Sindhu is amongst India's greatest Olympians. She is India's icon, inspiration and has caught the imagination of every Indian who dreams of playing for the country. Her incredible achievement - that of winning two Olympic medals in two consecutive Olympic Games will inspire a generation of budding athletes.
"Her success shows how the Target Olympic Podium scheme of the government has nurtured our Olympic hopefuls towards a podium finish. Just before setting off for Tokyo Olympics, she had an interaction with Prime Minister Narendra Modi and right after her victory he was the first person to call her and congratulate her. The nation of 130 crore Indians is thrilled by her smashing performance!" he added. (ANI)