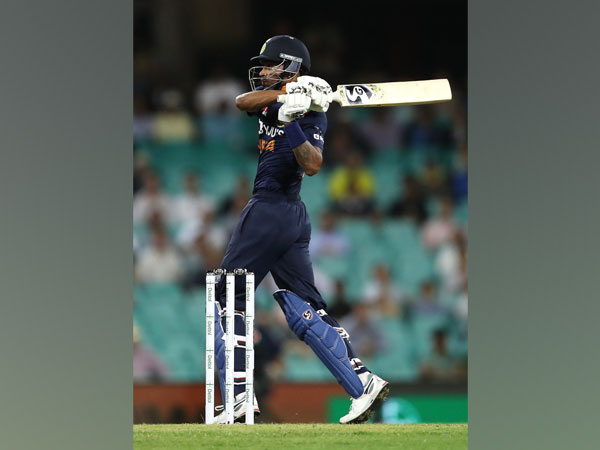 Sydney [Australia], November 28 (ANI): India all-rounder Hardik Pandya said that he will bowl only when he will gain "100 per cent bowling capacity" and that too in important games in crucial series and in the upcoming World Cup.

The all-rounder added that he is bowling on nets but he is saving his energy for the deciding encounters. Also, Pandya does not want to expose his bowling skills in every game.
Pandya played his first game after being sidelined for a lower-back injury last year. He made his return in the Indian Premier League for Mumbai Indians but as a batter. He did not bowl a single ball in the whole tournament which the Mumbai-based side had won.
"It is a process. I am looking at a long-term goal where I want to be 100 per cent of my bowling capacity for the most important games. The World Cups are coming. More crucial series are coming. Whenever it is required," Pandya said in a virtual press-conference after the match.
"I am thinking as a long-term plan, not short term where I exhaust myself and maybe have something else [injury] which is not there. So it is going to be a process, which I am following. I can't tell you exactly when I am going to bowl but the process is on. In the nets, I am bowling. It is just that I am not game-ready but I am bowling. It is all about confidence and the skill has to be at an international level," he added.
Pandya was the highest scorer for India as he scored 90 off 76 balls but failed to put his side over the line and suffered a 66-run defeat while chasing a monumental target of 375.
The visitors were never really in the game except for a brief stage when opener Shikhar Dhawan (74) and Hardik Pandya (90) put on 128 runs for the fifth wicket. The top half of the innings had left a lot to be desired even though openers Mayank Agarwal and Dhawan did get off to a flier and added 53 in the first five overs.
Pandya and Dhawan did look to counter and keep wickets in the bag, but the ever-increasing asking rate saw them both perish as they looked to take on Zampa. With Pandya dismissed in the 39th over, it was all about completing the formalities for the hosts. In the end, India was restricted to 308/8 in their 50 overs.
"I'm working on my bowling and I'm gonna come at the right time when it's needed. It genuinely does not make much difference because I believe in both skills which I do. I like to back myself and I have that confidence where whatever role is given to me, I try to fulfill that with my best ability. As a batter, I try to take the game deep and I try to score more runs. It does not add much pressure or it does not give me too much freedom. I'm just enjoying being on the ground as a batter or as a cricketer," Pandya added.
Both the teams will face-off in the second ODI on Sunday. November 29. (ANI)