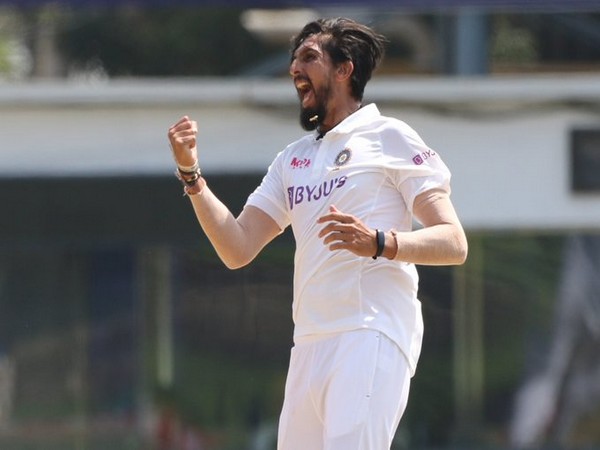 Ahmedabad (Gujarat) [India], February 22 (ANI): India pacer Ishant Sharma is set to play his 100th Test match for the country in the third Test of the ongoing series against England, starting Wednesday, but the fast bowler has said that his focus remains on helping the team win.

The four-match series between India and England currently stands level at 1-1 and both teams will lock horns in the pink-ball Test at the Motera Stadium from Wednesday. While Ishant is set to play his 100th game, he became the third Indian pacer to take 300 wickets in Test cricket earlier in the series. Overall, he became the sixth Indian to do so.
"If your career is 14 years long and you are still playing, you cannot name just one highlight. It is difficult to pinpoint just one highlight, every sportsperson has the graph going up and down. I cannot say about that one thing that took my graph or brought it down. Obviously, it feels great to be playing 100 Tests, I learn a lot from Zaheer Khan, I learnt from his work ethic. I have told everyone playing in the team that if you keep on working on your fitness, the rewards will come," said Ishant during a virtual press conference on Monday.
Ishant had made his Test debut under the leadership of Rahul Dravid and he has bowled some memorable spells like the one against England at Lord's in 2014 as he finished with figures of 7-74. During his first Australia tour in 2007-08, Ishant bowled a famous spell to Ricky Ponting.
Then skipper Anil Kumble had asked Ishant -- "Ek aur over dalega (will you bowl another over), and to this Ishant had replied: "Haan dalunga (yes, I will bowl). As fate would have it, Ishant went on to take the wicket of Ponting in the very next over.
"When I went to Australia in 2007-08 in Australia, I was just a youngster and I was just focusing on bowling. I did not think much, as we bowl in domestic cricket, I just followed the same. Over the years, I learnt by being in different situations. I have always had this motive in making the team win, till the day I play, I will play with the same motive. Personal milestones can be there, when you are about to leave your career you can see these milestones. But these are just numbers for me, I do not play for numbers, I just play to win," he added.
When asked whether lack of white-ball cricket has increased his shelf life in the longest format, Ishant replied: "I love to play white-ball cricket, sportsperson have their job to play, this is the least they can do. If I am not playing white-ball cricket, it should not affect my Test cricket. I should be grateful for how many matches I have played in Tests. I think like this only. I do not think that if I played all three formats, I wouldn't have played 100 Tests. I would have achieved the feat a bit late, but I would have played 100 Tests."
"I think about one game at a time, I do not think about the future. I understand my body and what type of training I need to do. Right now, I have understood that as you grow older, you need to think about the recovery process as well. I am looking after myself, everything has paid off for me nicely. It is tough to say which captain understood me the best. It is not about the captain understanding me but it is the other way around. It is important to know what the captain wants from me, when this communication is done, it makes things a lot easier," he added.
India had achieved an emphatic 317-run win against England in the second Test of the ongoing four-match series. As a result, the series stands level at 1-1 and the Virat Kohli-led side has also reached the second spot in World Test Championship (WTC) standings.
India remains in contention to make the final of the ICC World Test Championship. The victory in Chennai on Tuesday has lifted India to the second position with 69.7 percentage points on the points table but they cannot afford to lose another match as they need to win 2-1 or 3-1 to qualify for the final of the maiden edition of the championship.
England, who led the table after winning the opening Test, has slipped to the fourth spot with 67.0 percentage points. They can still qualify, but for that, they must win both remaining matches of the series against India. (ANI)