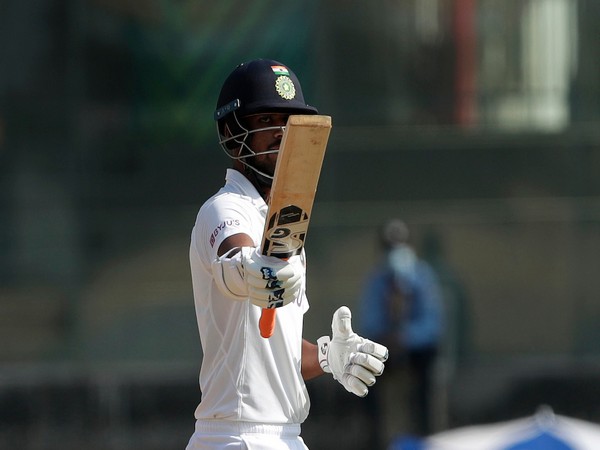 Chennai (Tamil Nadu) [India], February 8 (ANI): Washington Sundar played an unbeaten knock of 85 runs as England bowled out India for 337 in the first session on the fourth day of the ongoing first Test here at the MA Chidambaram Stadium on Monday.

As a result of being bowled out for 337, India gave the visitors a lead of 241 runs. England did not decide to enforce the follow on and the side sent out Rory Burns and Dominic Sibley to score runs at a brisk pace.
However, England got off to a bad start in the second innings as Burns was sent back to the pavilion on the very first ball as Ravichandran Ashwin had the left-handed batsman caught at the hands of Ajinkya Rahane. Dan Lawrence and Sibley then ensured England did not lose any more wickets before the lunch break.
At the lunch break, England's score reads 1/1, and the visitors' lead is 242. For the visitors, Sibley and Lawrence are currently unbeaten. The first session saw 81 runs being scored in 23.5 overs.
Earlier, resuming day four at 257/6, Ashwin and Sundar saw off the first 45 minutes with relatable ease and the duo managed to move the scoreboard at a brisk pace. During this course, Sundar also registered his second half-century in Test cricket.
However, skipper Joe Root introduced Jack Leach into the attack with the new ball and this resulted in Ashwin's dismissal in the 87th over of the innings, reducing India to 305/7, still 74 runs away from the follow-on mark. Sundar and Ashwin had stitched together a partnership of 80 runs from 178 balls.
Soon after, Leach sent Shahbaz Nadeem (0) back to the pavilion as he had the right-hander caught at the hands of Ben Stokes at first slip, and this reduced India to 312/8 in the 91st over. Ishant Sharma (4) was then dismissed by James Anderson and India was left at risk of being asked to follow-on.
In the end, Sundar hit a few aggressive shots off the bowling of Root, but Anderson dismissed Jasprit Bumrah (0) and as a result, India was bowled out for 337.
On day three, India was left in a spot of bother at 73/4 with Virat Kohli (11), Rahane (1), Shubman Gill (29), and Rohit Sharma (6) back in the hut, but Rishabh Pant (91) and Cheteshwar Pujara (73) revived the innings for the hosts. However, both batters missed out on scoring a century.
Brief Scores: England 578 and 1/1 (Rory Burns 0, Ravichandran Ashwin 0-1); India 337 (Rishabh Pant 91, Washington Sundar 85*, Dom Bess 4-76). (ANI)